Steve Bannon Bails Out: ‘I Can’t Do Trump Anymore’ 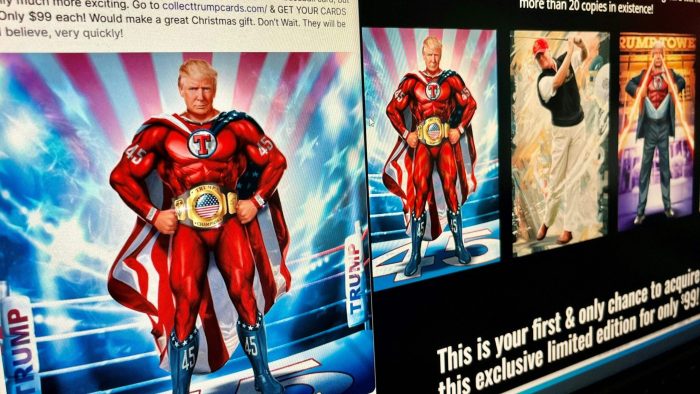 When you’ve lost Steve Bannon, you’ve lost the entire MAGA hillbilly base. That base is what keeps Trump in power too. So when Bannon saw this major league announcement by Trump go into the toilet over it being about digital playing cards instead of a Speaker of The House bid, he lost his many shirts over it. Many thought Trump would be announcing a Speaker of the House thing or possibly a Kari Lake running mate announcement.

Instead it was some bullshit minor league thing about selling playing cards, much like Trump Steak, Trump Ties or Trump University. Doomed to fail even though he sold out and made 4 million on it in 12 hours or less.

Even Steve Bannon and other key advisers to former President Donald Trump have had enough of his latest stunts — demanding everyone behind his wacky NFT collection be “fired today.”

“I can’t do this anymore,” an exasperated-sounding Bannon said Thursday on his show, “The War Room,” when discussing the widely derided collection the 45th president launched the previous day.

Trump’s former key strategist maintained that the man he helped get into the White House was “one of the greatest presidents in history,” and said he still “loves the folks” working for him, including his communications team.

“But we’re at war. They oughta be fired today,” Bannon stated firmly.

Two fellow Trump White House advisers — Dr. Sebastian Gorka and Steve Cortes — fully agreed, with Bannon noting that “you don’t have three harder cores” of expected support than the three of them.

Trump’s latest stunt “never should have happened,” said Gorka, who was Trump’s deputy assistant and is now a host for America First.

“Whoever wrote that pitch should be fired and should never be involved” in any part of Trump’s 2024 campaign, he said. “We don’t have time to waste … the president should not be involved with this.”PREVIOUS

Cortes went further, calling for the “firing of everybody” helping Trump at Mar-a-Lago, not just those involved in the cringe-worthy NFT release.

“Those people — all of them — have to go. They have to go for starters,” said the ex-president’s one-time assistant.

Cortes also stressed that “we can’t absolve President Trump of his responsibility” for the fiasco.

Cortes said the video Trump released is something he would expect from quirky Trump supporters like Diamond and Silk, “not the 45th president.”