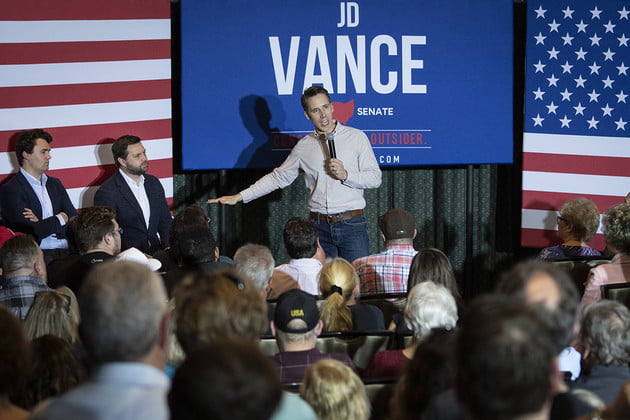 Russian deep cover agent Senator Josh “Haulin Ass” Hawley, has decided that the elections next week don’t matter. He’s already declared victory for JD Vance in Ohio and Blake Masters in Arizona. So, if there is a fraudulent election coming, it’s with these traitors to America. How can this terrible trio decide they will plan to reshape the Senate when two of them haven’t even won yet? So I guess they already know the outcome of the election next week, and are already planning their futures together. Talk about frauds and fraudulent elections coming. Watch to see if their plans come together…

The Missouri Republican will spend the last days of the election campaigning on behalf of the Ohio and Arizona candidates, hoping to gain allies against the mainstream wing of the party.

Josh Hawley doesn’t just want to flip the Senate by electing fellow Republicans Blake Masters and J.D. Vance. He wants to bend the entire GOP conference with a bloc of like-minded senators.

The Missouri senator, who helped convince both candidates to run, will go to Arizona on Friday for Masters, Ohio for Vance on Saturday and then finish the campaign on Monday in Missouri for GOP candidate Eric Schmitt.

The senator who led objections to President Joe Biden’s election win foresees a Senate GOP that is more confrontational toward large corporations and tech companies and less focused on Ukraine aid, and he’s convinced Vance and Masters have proven they’ll be allies in that endeavor.

Republicans have criticized aspects of both campaigns, arguing they didn’t do enough fundraising and took hardline positions that resonate better in primaries than in general elections. That only further persuaded Hawley, who said their persistence in the face of GOP reluctance gave him confidence that they “are going to have some backbone when they get to Washington, and are not going to be co-opted.”

“This is just the opening, the warm-up, in terms of the criticism that they’ll get if they stick to their guns. And they’ve shown me that they can,” Hawley said in an interview.

After Hawley encouraged them to run and backed them in contested primaries, former President Donald Trump ended up endorsing both candidates, propelling them to victory along with cash from GOP megadonor Peter Thiel. Now, if they get to the Senate, both Vance and Masters are proposing big showdowns with Biden over border security.

Hawley said Republican majorities should pass bills on border security and energy production, but that Republicans needed a tactical discussion on which “leverage point gives you the most pressure.” In 2018, Trump’s push for border wall money led to a 35-day partial government shutdown.

The Missouri senator drew stern internal blowback from GOP Leader Mitch McConnell on down for objecting to Biden’s electoral certification, while Republicans criticized him for his skepticism of some GOP judicial nominees. Hawley was the only vote against allowing Finland and Sweden into NATO and argues against “blank checks to Ukraine” as the country tries to fend off Russia.

Hawley envisions those positions will become more mainstream with prospective senators Vance and Masters, who “represent where the Republican Party is today.” In a statement for this story Masters said “Josh Hawley is brilliant and effective — the kind of Senator that I aim to be … I can’t wait to get to the Senate to join forces.”

And that means cutting against the party on proposals like using the debt limit to push for changes to Social Security and Medicare.

“That’s dumb,” Hawley said. “We need to do everything we can to keep them solvent for sure. But the idea of fiddling around with them and using those as leverage? I hope nobody’s seriously proposing that.”

Schmitt is a near shoe-in for election in Missouri, where Hawley supported Rep. Vicky Hartzler in the primary. Hawley said of Schmitt: “I’m going to close out the campaign with him, which says a lot about my priorities and my confidence in him.” Hawley’s other preferred candidates face less certain outcomes on election night.

Masters is facing an uphill climb in Arizona against Democratic Sen. Mark Kelly. The race is now close but not a must-win for Republicans to take the Senate. The party does need Ohio, however, and Vance currently narrowly leads the race for an open seat against Rep. Tim Ryan (D-Ohio), according to polls.

Hawley is betting if they win the party will adjust accordingly.

“They do sound different than your … typical Republican candidate. And I think that’s a feature, that’s not a bug,” Hawley said. “For folks who are like, ‘Oh, I don’t know about these guys, maybe they’re too different.’ Oh, no. They’re not. They represent voters now.”

In a reference to Thiel, Izzi Levy, a spokesperson for Ryan, said that Hawley’s visit means “Vance is ending his campaign the same way he began it — leaning entirely on out-of-state allies to come in and prop him up.”

Luke Schroeder, a spokesperson for the Vance campaign, responded that for Vance “hitting the campaign trail with principled conservatives like Sen. Hawley is a great way for us to run up the score” on Election Day.