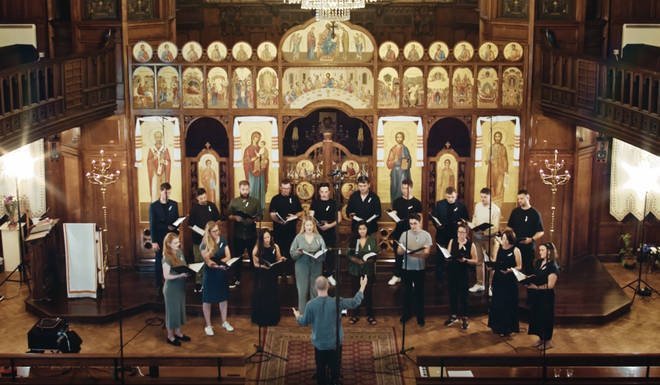 Singers gathered in London’s Ukraine Cathedral to give voice to a powerful new choral work to mark Ukrainian Independence Day and the six-month anniversary of Russia’s invasion.

Ukrainian Independence Day, on 24 August, will also mark the six-month anniversary of Russia’s invasion and events that have brought destruction, displaced millions, and the irreparable loss that comes with the horror of war.

One of the UK’s top choirs wanted to make a musical statement in solidarity with all Ukrainians, and has released a new recording based on words by Ukrainian President Volodymyr Zelensky and poet Serhiy Zhadan.

The choir, SANSARA, then performed the work in the poignant and beautiful surroundings of London’s Ukraine Cathedral.

The music of A Quiet Night – Tyhoyi Nochi is written by one of Ukraine’s foremost young composers, Kyiv-born Natalia Tsupryk, whose life has been devastated by the conflict.

“With the full-scale invasion of Ukraine, my life was split into before and after,” Tsupryk said. “Ukrainians desperately need the world’s assistance to win and end this cruel war as soon as possible.”

President Zelensky’s words are from a speech he gave on 9 May 2022, containing these lines:

“[These] words… show Ukrainians for what we are. Far from being victims and losers, we are warriors and winners,” the composer said.

Watch SANSARA’s performance of this powerful work for our times below:

A Quiet Night – Tyhoyi Nochi was written in a way that meant it could be sung in places where refugee communities can work together with local choirs.

SANSARA’s Artistic Director and conductor Tom Herring says: “We hope this work will be performed by Ukrainians and host communities in the months and years to come. SANSARA’s work is rooted in the belief that choral music has a unique potential to bring people together. A Quiet Night is a musical expression of solidarity with the people of Ukraine.”

The composer, choir and all involved are asking for donations to the Ukraine Refugee Appeal, which offers help for displaced Ukrainians in the UK.

The project is also supported by the Ukrainian Welcome Centre, which operates within the cathedral, and the Myanmar Accountability Project.

Stream this piece, and find out more about the artists and supporters of the project here.