Foreign politicians, an indicted election clerk and Vanilla Ice: Inside the revolving door of Trump’s Mar-a-Lago 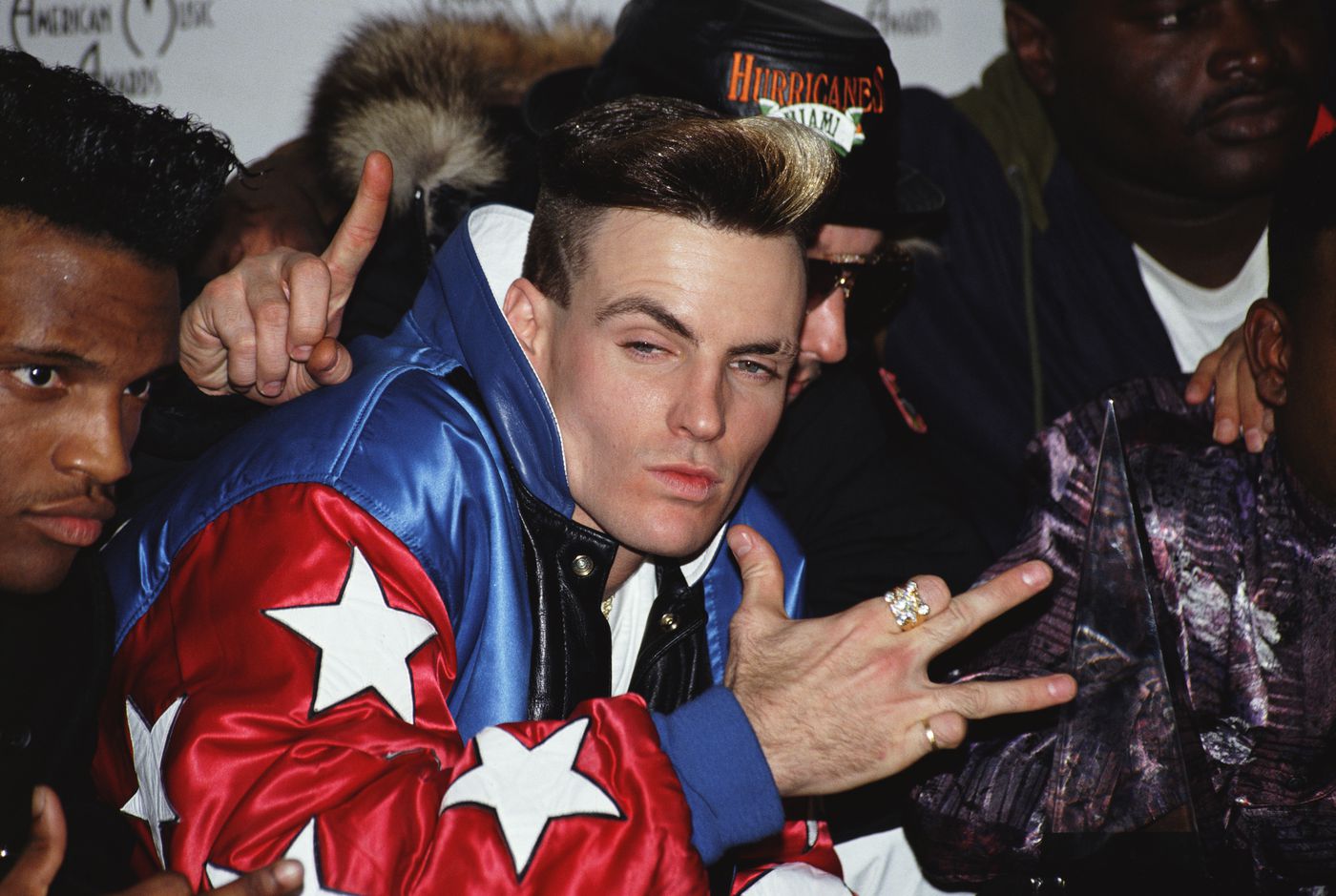 Ice Ice Baby, Ice Ice Baby. WTF is this guy doing with Trump and around all those National Security Top Secret Classified documents? But hey, Don King with a gun? Trump didn’t get bothered by anyone with a gun, “let my people come” he said. Of course there wasn’t a broke dick amongst his people, and hillbillies who gave Trump most of his cash sure weren’t let inside to trash the place either. Only those with money were allowed in. And of course the hillbillies who made Trump rich were excluded because, ya know, they are the suckers who get took: can’t have them stinking the place up with their trailer trash stench.

The film, a widely-debunked account of unproven 2020 election fraud, was the latest movie from Dinesh D’Souza, the conservative author and filmmaker who Trump pardoned before leaving office, after D’Souza pleaded guilty in 2014 to violating federal campaign finance laws. Attendees were dressed in glitzy gowns and tuxedos, including one guest who wore a jacket emblazoned with the word “Rigged” on the lapels, in support of Trump’s claim that the election had been stolen.

The crowd was a Who’s Who of Trump loyalists, many of whom had worked to overturn the 2020 results and some of whom were under investigation for their efforts. Among the guests were retired Lt. Gen. Michael Flynn, Trump’s former national security adviser whom Trump had pardoned after Flynn pleaded guilty in 2017 of lying to the FBI; Tina Peters, a Colorado election clerk who pleaded not guilty to charges of breaching voting systems following the 2020 election; and MyPillow CEO Mike Lindell, who was still pushing election conspiracy theories

Although the crowd included several former Trump administration officials, none of the guests would have had top-secret security clearance. And yet, as they sipped champagne and mingled around the perimeter of the pool at the center of the estate, all of them were on the premises where law enforcement says Trump kept a trove of classified documents whose contents may have included some of the nation’s most closely guarded secrets.

While it is unclear if any guests approached the specific areas where the materials were being stored, the trove included the documents the FBI took away when they executed the August 8 raid based on evidence that classified material remained at the estate even after agents removed documents during a previous visit in June — which itself followed the National Archives’ retrieval in January of 15 boxes of documents that had been improperly taken to Florida when Trump left the White House.

The May movie screening offers a glimpse into the bustling world of Mar-a-Lago, the sprawling property that serves as both Trump’s residence and his private club, which remained highly active in the months leading up to the FBI’s initial visit in June, playing host to weddings, fashion shows, political fundraisers, and Trump’s private business dealings — all while top secret government documents were on the premises.

Interviews with over a dozen visitors and a review of social media posts show that in weeks leading up to the raid, dozens of events were held at the club, which together drew thousands of visitors from around the world to the president’s property.

And though a number of Trump’s lawyers have taken to the airwaves in recent days to offer assurances that Mar-a-Lago is highly secure, others with experience at the property say otherwise.

“At Mar-a-Lago, the priority is the members, not security. Period,” said Stephanie Grisham, Trump’s former White House press secretary, who had a public falling out with the former president and his family that included publishing a tell-all book last year, but previously spent long hours at the estate as one of his most senior advisers. “There would be times when a member would bring a guest where the background check was shady and we would get these calls, and it was always ‘Let them in, let them in.'”

“The vetting process was definitely not what it should have been,” said Grisham, who served nearly the entire four-year term in the Trump White House, working in the press offices of both the president and the first lady, before resigning following the Jan. 6 attack on the Capitol.

Grisham recounted the time when boxing promoter Don King, who had been one of Trump’s few celebrity supporters during his 2016 campaign, came to see him at Mar-a-Lago after Trump won the election and brought a gun with him. According to Grisham, aides around the Trump thought to themselves, “Who the hell shows up to Mar-a-Lago to see the president of the United States with a gun?”

But Trump didn’t have the same concerns.

“Secret Service said, ‘No you can’t come in,'” Grisham recalled. “And the president said, ‘No let him in, I don’t care.'”

King did not respond to a request for comment from ABC News.

“Guests at Mar-a-Lago move pretty darn freely,” Grisham said. “Hundreds of guests would file directly past the president’s own front door. There were Secret Service, but that is kind of unheard of.”

Sources familiar with the federal investigation into the allegedly improperly retained materials have told ABC News that the top secret documents discovered at Mar-a-Lago this month raise critical national security questions, and that security officials must now try to track the chain of custody to determine if any of the material was compromised. The FBI’s inventory of what agents took from the estate includes material identified as SCI — sensitive compartmented information that is so secret that it can only be viewed in a special secure facility.

One expert said the presence of such information at Mar-a-Lago was a “huge vulnerability” that could “partially explain” why the FBI escalated its investigation earlier this month and served a search warrant on the property, where it ultimately seized 11 sets of documents ranging from confidential to top secret and SCI.

“From a counterintelligence perspective, this is an extraordinarily high-risk situation,” said John Cohen, a former Department of Homeland Security official who is now an ABC News contributor. “I can tell you with all confidence that the fact that the FBI served a search warrant communicates a high level of concern regarding the potential for inappropriate access to this material.”

In a statement to ABC News, Trump spokesperson Taylor Budowich said, “The Democrats have spent seven years fabricating hoaxes and witch hunts against President Trump, and the recent unprecedented and unnecessary raid is just another example of exactly that.”

“He will defeat this massive abuse of government just like every one before, by exposing the lies and championing the truth,” Budowich said.

Since Trump returned to Palm Beach after losing the 2020 election, Mar-a-Lago has emerged as the power center for Republican politics, with candidates flocking to the former president’s resort to court his support and rent out the club for lavish fundraisers. In total, federal campaigns and committees have so far spent $1.63 million at Mar-a-Lago through the 2022 midterm election cycle, according to FEC reports reviewed by ABC News.

Some of the former president’s most high-profile allies in Congress have held fundraisers at Mar-a-Lago in recent months, including Florida Rep. Matt Gaetz, who is under investigation for sex trafficking a minor, multiple sources tell ABC News. Gaetz has not been charged with any crime and has denied all wrongdoing. Others include Republican Georgia Senate candidate Herschel Walker, Arizona gubernatorial candidate Kari Lake, and Arizona Senate candidate Blake Masters, according to sources and social media posts.

Fundraisers at Mar-a-Lago have attracted hundreds of guests, many of whom would not have undergone background checks prior to entering a property on which highly sensitive government documents were stored. And while normally guests would not be required to undergo background checks to attend a gathering at a former president’s property, the top secret documents that were allegedly being held on the property raise numerous security concerns.

In addition, security experts say that passing a government background check involves a review of organizational affiliations and social media activity. According to social media posts, among those who have attended events at Mar-a-Lago are several candidates and their supporters who have self-professed ties to the QAnon conspiracy, which law enforcement officials have warned could be radicalizing followers toward violence.

In March, Mar-a-Lago hosted a fundraiser for Florida Republican congressional candidate Darlene Swaffar, who the activist organization Media Matters for America ranks among a long list of QAnon supporters running for Congress in 2022, saying that she has “repeatedly tweeted the QAnon slogan and has posted a video of herself taking an oath supporting QAnon.”

During the event, held in Mar-a-Lago’s crystal ballroom, Trump aides pulled her aside and surprised her with a private one-on-one meeting with the former president, according to Swaffar.

“I heard about you. I heard a lot about you. I’ve heard great things about you,” Trump told her, according to Swaffar. “I’ll tell you what, if you win the primary, I will strongly endorse your campaign.” Swaffar, however, ultimately lost her primary this past Tuesday.

Swaffar told ABC News she felt security at Mar-a-Lago was strong when she was there, and said that the meeting with Trump was a total surprise. Swaffar also said she does not support or follow QAnon, despite her repeated posts online in 2019 and 2020 about the conspiracy theory.

During his time in office, Trump held multiple summits at Mar-a-Lago with foreign leaders including Chinese President Xi Jinping and then-Japanese Prime Minister Shinzo Abe, boasting about how international leaders enjoyed visiting with him at the resort. That trend has continued since Trump left office.

Former Argentinian president Mauricio Macri tweeted a photo of a meeting with Trump in April, in which he said, “Today I shared a lunch with Donald Trump, where we exchanged opinions on the global context, the bond between Argentina and the United States, and everything that our countries can continue to build together.”

Due to U.S. government regulations, experts say it would be a security risk to allow non-U.S. citizens access to where top-secret documents are stored.

Mar-a-Lago is often bustling with a celebrities. In January, music artist and entrepreneur Ray J reportedly met with Trump at the resort, taking a photo inside the former president’s home office. In March, the rapper posted video and photos from a separate trip to the resort where he introduced Trump to Kodak Black, for whom the president had issued a commutation before leaving office.

“It’s the place to be in Palm Beach,” said Bill White, who has been attending the club as a guest for 25 years. “There’s always well-known faces and business people eating there or visiting.”

White attended a 400-person wedding at Mar-a-Lago just days before the May movie screening, and described Mar-a-Lago as a “fortress.” Security protocols there include vetting of attendees and a large Secret Service presence on the grounds to ensure strict monitoring of guests’ whereabouts, according to White.

But Cohen said those procedures are primarily for the purpose of eliminating threats to the former president — not for protecting documents.

“There’s a whole different level of security that would be required for the purposes of national intelligence security,” he said.