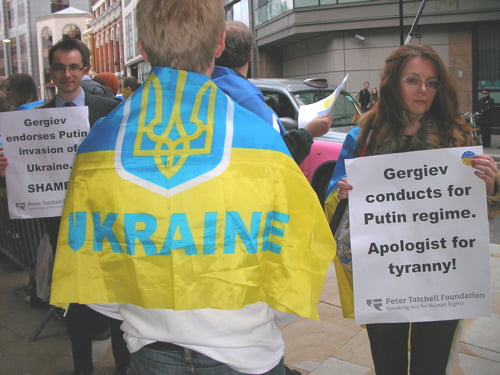 JAN 30, 2015 – Ukrainian-Americans in the New Jersey area are assembling a protest tonight at the newly-renovated Mayo Performing Arts Center, to protest and call attention to the conductor of the Mariinsky Orchestra, Valery Gergiev, who has been a very vocal supporter of Vladimir Putin’s policies of annexing Crimea. Gergiev even signed an open letter supporting the annexation, murder, and brutalization of the sovereign nation. Gergiev also dabbles in hate speech and is constantly making anti-gay remarks, supporting and adding to the brutal policies of Vladimir Putin and the Russian government against the LGBT community.  If you are in the New Jersey area and want to try and attend, check out their Facebook Page “Conduct Peace, Not War!”.  (Featured image credit: Peter Tatchell Foundation) Read more on DailyRecord.com here.