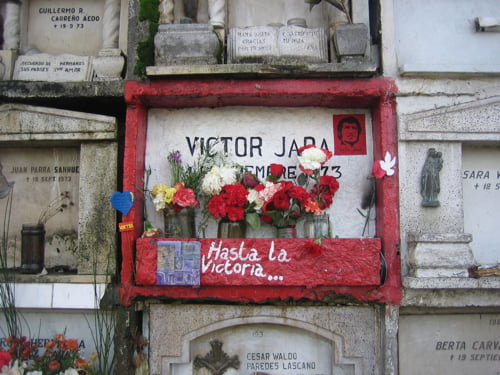 OCT 20, 2014 – Almost 40 years after the death of Chilean folk singer Victor Jara, three Chilean ex-army officers have been indicted in the cover up of the murder of the musical-activist. Victor Jara’s songs and lyrics played a huge role in the Nueva Cancion musical revolution movement that helped foment and fuel the Left’s socialist movements in Portugal, Spain and Latin America during the 1970s and 1980s. Victor was murdered by the Chilean army during the 1973 Chilean Coup led by US President Richard Nixon and the CIA, who funded and armed the Chilean rightwing military to overthrow and murder Chilean President Salvador Allende. President Allende was the first Latin American politician elected in open elections, and the Chilean conservatives and the political Right hated him for he was instituting many social reforms such as collectives to help the 99% and the common folks. Augusto Pinochet was installed as military dictator puppet, and he began a reign of torture and death. This is another crime that Richard Nixon could have been impeached and removed from office for.

Read more about the musical hero Victor Jara in a piece by Alexander Billet on RedWedgeMagazine.com here, and watch a music video of Victor Jara’s “Manifesto” below. (photo credits: Natl. Library of Chile, Lion Hirth)