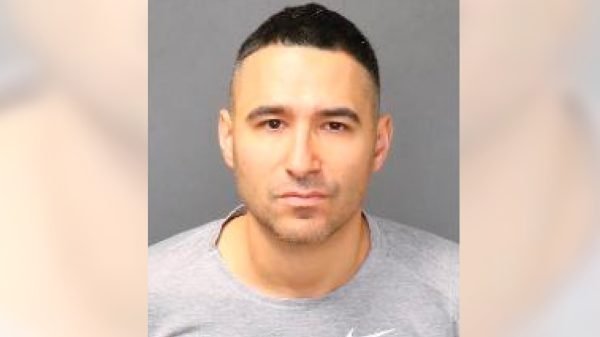 Wow, it appears that the GOP accepts anyone these days, but one requirement you must have is a criminal history, and the worse the crime the better your chances are of obtaining a seat. Luckily for us this scumbag didn’t win. But what if he had? What would things look like then?

Solomon Peña, who is accused of hiring men to open fire on elected officials’ homes, previously did time for running a burglary ring.

A failed Republican political candidate who allegedly plotted to shoot up Democratic officials’ homes has a checkered legal history, including a 2008 conviction for his role as head of a burglary ring.

Solomon Peña won just 26 percent of the vote in his bid for New Mexico’s 14th House district. Despite the loss, he refused to concede, calling the race “rigged,” and showing up to the homes of elected officials to complain. In January, he’s accused of going violent with his grievances. Authorities accuse Peña of paying four men to shoot up the houses of four Democratic elected officials in Albuquerque.

It’s not the first time Peña faced allegations of running a crime ring. In 2008, he was convicted in a sprawling plot to steal cars, smash them into stores like Toys R Us, and grab expensive merchandise. While in prison, he repeatedly and unsuccessfully filed lawsuits against his jailers over minor disputes like not being granted a work duty in the kitchen.

Peña’s smash-and-grab burglary spree began in 2006, after a hangout at his then-girlfriend’s apartment, friends testified in court. While “hanging out, having drinks” at the apartment, Peña or his partner suggested that they “need[ed] to make money,” according to a friend who attended the meetup.

Peña and his accomplices got their money—he and some of the drinking buddies soon went on to smash their way into some of Albuquerque’s biggest stores, in a crime spree that lasted more than a year, New Mexico’s KOAT reported at the time.

The crime ring’s MO involved driving stolen cars into big box stores after dark and loading up shopping carts with expensive electronics and jewelry. The manager of a Hastings store testified that Peña and his crew made off with 10 to 12 Xboxes, eight to 10 PlayStation Portables, and about 80 Xbox games. A Toys R Us manager testified that Peña’s crime ring cost them more than $10,000 in stolen merchandise, much of it from gaming systems.

Police ultimately identified the crime ring, who’d been captured on security footage at multiple stores. But while most of Peña’s co-conspirators admitted to the theft and struck plea deals, Peña maintained his innocence and asked for a jury trial, where he was convicted on 15 counts including commercial burglary, conspiracy to commit commercial burglary, larceny, and contributing to the delinquency of a minor.

Investigators named Peña as a ringleader in the scheme. “He is one of the primary figures in this group that was going in and burglarizing the different big box stores,” Mark Drebing, a deputy district attorney, told KOAT after the arrests.

Peña was sentenced to prison, where he filed at least three lawsuits against jailers. In one, Peña alleged civil rights violations because, when he attempted to go to the prison’s education resource center, a guard told him the center was closed. Peña maintained that the center was actually open, prompting an argument with the guard, who filed a disciplinary complaint against Peña.

In another lawsuit, Peña complained that he was given a new job assignment in the prison, but that guards hadn’t told him where to report. When he didn’t show up on time, Peña received a disciplinary writeup, which he said was unfair.

In a third lawsuit, Peña detailed his multiple failed attempts to get a prison job working the kitchen’s graveyard shift. Peña filed records requests about the reasons his applications were denied, and later filed a complaint “citing ‘discrimination’ by him not being permitted to work kitchen graveyard,” his lawsuit reads. (The prison rejected the complaint, stating that it was “not a grievable issue.”)

Peña completed his probation in 2021, KRQE reported. In February 2021, he was charged with exceeding a speed limit by 26 to 30 miles per hour, court records show. The case was dismissed after a prosecutor failed to appear in court.

After prison, Peña launched a roofing supply company, business records show. Although he had no previous political experience, he ran an unopposed bid for New Mexico’s 14 House district in 2022. He netted 383 votes in his primary race, and lost overwhelmingly in the general, winning just 2,005 votes to the incumbent Democrat’s 5,588 votes.

“It was rigged,” Peña tweeted on Nov. 18, above a screenshot from a different election-denying candidate in Arizona, who had also lost his race. “I will be rewarded for proclaiming the truth from the beginning of this national nightmare. I never backed down, not once.”

The shootings, at the homes of two county commissioners and two state lawmakers, came after Peña visited officials’ homes with paperwork he claimed proved voter fraud. Although no one was hurt in the shootings, three bullets passed through the bedroom of one state lawmaker’s 10-year-old daughter. Investigators claim Peña paid four men for the shootings, texting them the addresses of his alleged victims.

Despite allegedly contracting out the shootings, Peña is accused of going to one of the houses and pulling the trigger on a gun, which malfunctioned.

The wannabe lawmaker’s final tweet is a boast about not conceding his loss.

“Trump just announced for 2024,” he tweeted in November. “I stand with him. I never conceded my HD 14 race. Now researching my options.”