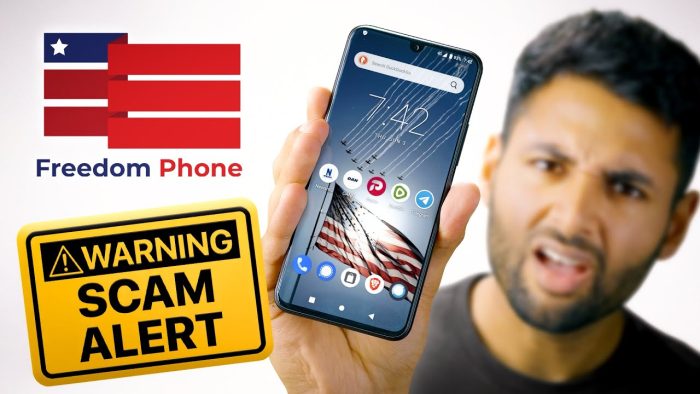 Another Trump endorsed scam implodes. The Freedom Phone was supposed to allow conservatives to talk to one another without the super secret google and phone companies tracking their movements. It was supposed to be the way that conservatives could feel safe talking about insurrections, sedition, and even a few drug deals on the side, because conservatives need that sort of protection don’t ya know.

But that didn’t happen, and now conservatives are left holding to what amounts to as paperweights, as the phones have been bricked and or don’t work.

The Trump-friendly Freedom Phone has imploded over allegations of $10,000 video game shopping sprees. Phone buyers were left with broken “paperweights,” according to its founder.

In the summer of 2021, conservatives aggrieved over Big Tech censorship saw a new smartphone as their savior. Dubbed the “Freedom Phone,” the $500 device was the creation of Bitcoin mogul Erik Finman, who promised customers a phone loaded with conservative apps and free from liberal Silicon Valley influence.

Conservative influencers encouraged their fans to buy the phone, receiving a sizable cut of each sale for themselves. Even after The Daily Beast and other media outlets revealed that the Freedom Phone was just a cheap Chinese-made phone sold at a hefty markup, it was a hit, quickly selling roughly $4 million worth, according to court records.

“I’m holding a freaking phone that is not controlled by Apple or Google,” conservative personality Candace Owens said in an Instagram video. “We made the switch immediately.”

Two years later, though, Freedom Phone’s business is falling apart amid customer complaints. In a bitter, previously unreported legal battle that began in April 2022, the men behind Freedom Phone’s backers have accused one another of blowing their windfall profits—in one case, in a $10,000 shopping spree for video games. Finman has even sued to keep his face and name from ever being associated with Freedom Phone in the future.

In Freedom Phone’s first days, it seemed like Finman, the self-proclaimed “youngest Bitcoin millionaire,” might have the tech and marketing prowess to pull off the creation of an entirely new smartphone. His promotional video for the phone quickly went viral on the right in July 2021, with Finman promising a phone loaded with apps for conservative outlets like Newsmax and One America News.

The video was a hit, but Freedom Phone’s promotional materials were curiously devoid of technical details. In reality, it was a rebranding of a Chinese phone that was available online for $120—substantially less than the Freedom Phone’s $500 price tag.

Still, buoyed by endorsements from conservative influencers like Owens, former Donald Trump adviser Roger Stone, and Twitter pundit Ian Miles Cheong, Freedom Phone orders flooded in. Finman quickly sold at least 8,000 units, according to court records, raising somewhere between $3.5 and $4 million. But payment processors handling the orders refused to hand the money over to Finman, apparently concerned that the phone was a scam.

With millions of dollars held in limbo and angry customers waiting for their phones, Finman cut a deal with ClearCellular, a Utah-based company that had made its own phone before. Finman sold the Freedom Phone branding and its parent company, Finman LLC, to ClearCellular. While the sales contract has been sealed in the ensuing court battle, it included a $300,000 one-time payment to Finman, an annual $240,000 salary for the Freedom Phone founder as its chief marketing officer, and a $75 payment for each phone sold, according to court filings.

Finman and ClearCelullar founder Michael Proper had met a year earlier, at a presidential fundraiser for failed candidate and former child star Brock Pierce. In a September 2021 interview with The New York Times, Finman compared himself to basketball legend Michael Jordan and Proper to Nike founder Phil Knight. Together, Finman said, they would create a cultural and business phenomenon on the scale of Nike’s Air Jordans.

But while Michael Jordan has earned more than $1 billion since launching Air Jordan with Nike, Finman’s partnership with Proper soon proved to be less successful. In March 2022, Finman resigned from his chief marketing officer position. A month later, he sued Proper and ClearCellular over a host of claims, including defamation and unpaid wages.

“Mr. Proper’s conduct was anything but proper,” Finman’s lawyers wrote in their complaint.

Testifying in court in August 2022 about the initial deal, Proper said he thought he was rescuing Finman from his failure to actually deliver the phones. In his retelling, Finman was a great marketer, but stood little chance of fulfilling the thousands of outstanding orders on his own.

“They had a lot of negative reviews about people calling Erik’s bluff,” Proper said in court. “This guy did not create a phone. This guy does not understand the industry.”

Proper later claimed he was also concerned that influencers like Owens would be embarrassed if Finman failed to ship enough working phones.

“We wanted to help Candace Owens not get hurt,” Proper said in court.

In his testimony, Proper complained that Finman failed to deliver on a supposed promise to introduce Proper to Owens.

The relationship between Finman and Proper quickly soured. In Finman’s telling, ClearCellular blew through deadlines, promising to mail the phones by September 2021 but not shipping them until February 2022. Some of the Freedom Phones didn’t work when they arrived, Finman claimed, with customers calling them “paperweights.” Aggravating tensions between the two men, a notice appeared on another website operated by Proper encouraging angry Freedom Phone customers to launch a class-action consumer fraud lawsuit against Finman.

The two also clashed over the millions of dollars left in Freedom Phone’s accounts. Finman claims that he had to dip into his own finances to pay Freedom Phone MAGA influencer endorsers, and to fund some of the orders himself. ClearCellular took months to take control of the money, according to Finman, in what he interpreted as an effort to avoid taking over the responsibility of fulfilling the orders. When $400,000 of the money was unfrozen, Finman alleged in a lawsuit, Proper blew $10,000 in a “shopping spree” at Costco buying video games and other electronics.

For his part, Proper alleged in court papers that Finman took $500,000 from Freedom Phone’s accounts. Asked at one point to hand over the accounts, according to Proper, Finman instead responded only with a spreadsheet he had made himself to explain where the money had gone.

“Ultimately, as we helped him, he ran off with the money,” Proper said in his August 2022 testimony, wondering aloud why Finman wasn’t facing criminal charges.

Along with Owens, the ongoing court battle has touched on other conservative figures, including former Trump White House Steve Bannon. After leaving ClearCellular, Finman claims Bannon hired him to work on a cryptocurrency project.

During cross-examination in August 2022, Proper’s lawyer asked Finman if that new job with Bannon proved that Finman’s reputation hadn’t been destroyed. Finman shot back that working with Bannon, who was then awaiting sentencing for what would become a four-month prison sentence for contempt of Congress, didn’t prove that his career had survived Freedom Phone.

“I feel like my reputation is not necessarily proven to be superb if that is a business partner,” Finman said, noting that Bannon is “awaiting sentencing to go to prison.”

Much of the legal fight so far has focused on whether ClearCellular, operating as Freedom Phone, has the right to use Finman’s viral video promoting the phone. While a judge eventually ruled that Proper could use the video, the company took it down anyway, costing what Proper claims amounted to thousands of dollars in monthly sales generated by the video.

In court, Finman reflected on how Freedom Phone’s collapse hurt its customers, who had each spent $500 on the idea that the supposed tech wunderkindcould give them a phone for conservatives free from the Silicon Valley giants. Instead, Finman said, the Freedom Phone debacle “soils” his reputation.

“A lot of these are elderly customers,” Finman testified in August. “I mean, it’s horrible. It’s heartbreaking.” (Ed Note: Yeah, so heartbreaking to steal money from the elderly)