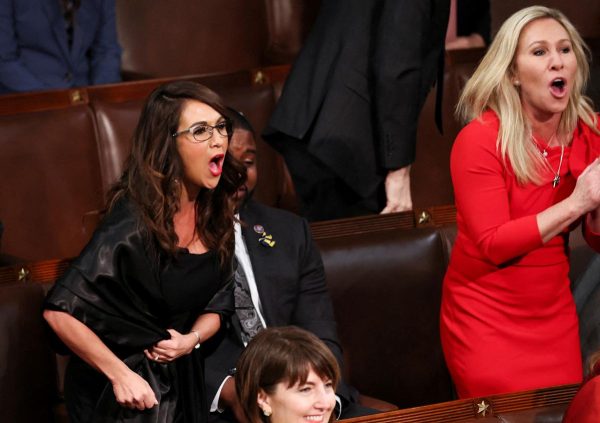 Oh the days, the days when the Japanese attacked Pearl Harbor and FDR got up and called it a day which will live in infamy. Oh the days, when decisions over getting rid of Russian nukes in Cuba or going to hell in a nuclear conflagration were decided upon. Oh the days, when Nixon was preparing to go to China. Oh the days, when Lyndon Johnson dealt with the horrors of Vietnam. Such tough decisions that had to be made in those times.

Now all of that is gone, replaced with which MAGA bitch won or lost while slugging it out in a stinky congressional toilet.

Instead of the middle section of the House chamber where conservatives and GOP castaways have taken up residence for years now, Greene was sitting near the front of the chamber in a section of leadership loyalists, right next to Rep. Ann Wagner (R-MO), who came into Congress in 2013 and immediately started cozying up to McCarthy and GOP leaders.

While Greene sat with her new friends and cheered on McCarthy—at one point, she grabbed a selfie with McCarthy to commemorate the night he took the speaker’s gavel—Rep. Lauren Boebert (R-CO) was in a more familiar spot.

Boebert proudly sat where she usually does: in the middle section of conservatives, right next to Rep. Matt Gaetz (R-FL). At one point, when McCarthy was just short of the votes to become speaker, he walked over to Boebert and Gaetz and tried to convince one of them to vote for him. Neither of them did.

As Greene has made a concerted effort to play nice with McCarthy, Boebert has seemed to do the opposite. After she narrowly won re-election in her purple district by some 500 votes, Boebert has leaned into her MAGA firebrand status. The speaker vote was perhaps the clearest example of the split between—and different strategies of—Greene and Boebert. But the reality is, they’ve both been taking different paths for quite a while now.

The speaker vote was a lucid manifestation of that different path, but the divide has been playing out behind closed doors for months. And while the whole world could see the literal space between them during the speaker vote on Jan. 7, it was allegedly in the privacy of the ladies room, four days earlier, where the two really had it out.

On the first day of Congress this year, Jan. 3, the mounting tension between Greene and Boebert reached its boiling point. According to multiple sources, the two women were nearly in a screaming match in the Speaker’s lobby ladies room just off the House floor.

“Greene questioned Boebert’s loyalty to McCarthy, and after a few words were exchanged, Boebert stormed out,” a source familiar with the fight told The Daily Beast.

According to another source familiar, while in the bathroom, Greene asked Boebert, “You were OK taking millions of dollars from McCarthy but you refuse to vote for him for Speaker, Lauren?”

The first source said Greene was in a stall and, upon coming out, confronted Boebert about taking money from McCarthy for her re-election and then turning against McCarthy when it came time to vote. The Colorado Republican was allegedly unaware that Greene was also in the bathroom at the time.

“That’s when Lauren said, ‘Don’t be ugly,’” the first source said, before she—in the words of this source—“ran out like a little schoolgirl.”

Asked about the dustup in the Capitol, Boebert simply said, “See you later. Bye.” (Boebert didn’t return The Daily Beast’s subsequent request for comment ahead of publication.)

At least one other member is alleged to have witnessed the exchange: Rep. Debbie Dingell (D-MI). But over the course of three interviews with three different Daily Beast reporters, Dingell would not say what she saw.

(During one interview, Dingell seemed to acknowledge that something happened between Greene and Boebert, but she said she wasn’t going to talk about it “in any way, shape, or form.”)

For months now, the tension between the two lawmakers has been building. Allegedly, one source of their conflict has been Ukraine aid.

In February 2022, after Russia invaded Ukraine, Boebert called on the United States government to “contain our enemies’ ability to fund their military ambitions and strengthen democracies throughout the world.”

That didn’t sit well with critics, but Boebert doubled down in the months following. She introduced a House bill this past March calling for financial assistance to be sent to Ukraine, and in the last year, Congress has approved tens of billions in military and humanitarian aid to the country.

But in the “America First” world of Donald Trump and the MAGA movement, supporting Ukraine aid now amounts to a grievous sin, even if many Republicans and Democrats agree that backing their fight has been a worthy investment in degrading and destroying Russia’s military.

Greene hasn’t commented directly on the Boebert bill, but she has declared there should be “absolutely” no more money sent to Ukraine. “We serve AMERICA NOT UKRAINE!” she tweeted.

Another point of contention remains the degree to which they support Trump.

On one hand, Greene issued an early endorsement of the ex-president. Boebert, on the other hand, has left the door open to backing a Republican 2024 presidential contender that isn’t Trump.

“I certainly would not turn my back on President Trump. I am a huge supporter of his,” Boebert told a local Colorado CBS affiliate back in November, while not pledging her alliance to Trump’s 2024 presidential endeavor. The lawmaker went on to add that she also does “love” Trump foe Ron DeSantis, the Florida governor.

But Boebert’s shaky support of Trump—so far—hasn’t become an issue with those close to the former president. “I haven’t heard anyone even bring it up,” one Trump adviser told The Daily Beast on Sunday. (A Trump spokesperson didn’t return The Daily Beast’s request for comment.)

Not so long ago, Boebert and Greene moved essentially in lockstep. They regularly voted together—sometimes siding against the rest of the entire House of Representatives. And they were—and still are—two of the most recognizable women on the far right.

Beyond being ideologically aligned, however, the two actually seemed to be friends. They were often spotted together around the Capitol complex. They’d go to press conferences together. Saturday Night Live once even branded Boebert and Greene as a gun-brandishing duo. And perhaps most notably, they regularly sat with each other on the House floor.

Seating arrangements in the House are much like a high-school cafeteria: unassigned but not random. There are cliques and unspoken rules. Boebert and Greene—with a rotating cast of hardline conservatives like Gaetz—regularly sat together. They were a clique all to their own.

But even before the McCarthy fight began to brew, there was a noticeable shift. Some tiffs have come to light in the last year, like when Boebert didn’t come to Greene’s defense after the Georgia Republican spoke at a conference hosted by the white nationalist Nicholas Fuentes last spring. The two also reportedly almost came to blows at a House Freedom Caucus meeting around the same time.

By the turn of the new year, it was clear: there was a full-on breakup.

While Boebert always seemed like the more agreeable, less controversial member, it was Greene who began sitting, walking, and working with more establishment Republicans.

Greene lost her committee posts in the last Congress after a series of threatening past remarks against Democrats were revealed—with 11 Republicans voting with all Democrats to oust her. But Greene’s shift toward a more agreeable approach has earned her some room for recovery among her fellow House Republicans.

Greene is now poised to be rewarded for her loyalty to McCarthy. She’s already swung back at “Patriots”—more commonly understood as the hardcore MAGA set—for not backing McCarthy after the now-speaker announced his support for releasing additional video footage from the Jan. 6 Capitol riot.

Still, looming over the duo’s split is Greene’s rising profile and her increasingly strategic cultivation of power and influence. Recognizing that McCarthy was the likely next speaker from the GOP, Greene spent months aligning herself closely with him. After Republicans captured the House majority in November, she served as a key validator of McCarthy’s credentials for the speakership with a skeptical party base.

And earlier this month, as McCarthy scrambled to assemble the votes needed to win the gavel, Greene was the evident liaison between Trump and McCarthy’s defectors, who the ex-president leaned on to support the California Republican.

Those efforts position Greene to be an influential presence in McCarthy’s GOP, and it’s likely that he will reward her with a plum perch on the House Oversight Committee. Looking beyond Capitol Hill, sources told The Daily Beast she’s on Trump’s own vice-presidential shortlist for his 2024 bid.

Democrats, including in Bidenworld, have also begun highlighting Greene as the face of the far right, especially as the president and top Democrats homed in on the branding of “MAGA Republicans” as part of their 2022 midterm message.

In contrast, Boebert nearly lost her 2022 re-election bid to Democrat Adam Frisch. It was hardly expected to be a competitive race. But after a recount, Boebert only won by 546 votes. That her first move upon returning to Congress was attempting to sink McCarthy’s speakership means Boebert may be something of a pariah within the GOP ranks for the next two years—a striking reversal of fortune, compared to Greene.