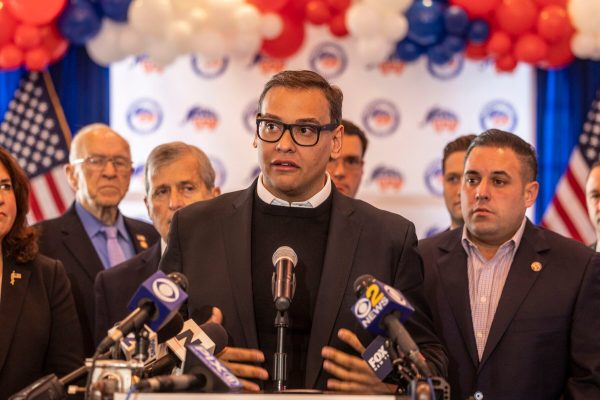 Nothing surprises me on this stupid bastard George Santos. The only thing that is surprising is that Law Enforcement and prosecutors have let this guy slide on multiple felonies, so powerless they are to indict someone for actually committing crimes these days.

The alleged Ponzi firm that hired George Santos made a payment of more than $400,000 into a bank in Uzbekistan, The Daily Beast can reveal.

The reputed Ponzi scheme that employed embattled Rep. George Santos for nearly a year had deeper ties to the shadowy world of the former Soviet Union than previously understood, a review by The Daily Beast has uncovered.

The Daily Beast revealed weeks ago that Andrew Intrater, cousin and money manager to heavily sanctioned oligarch Viktor Vekselberg, pumped tens of thousands of dollars into Santos’ federal committees and a New York State PAC headed by the politician’s sister—while the Washington Postreported on Monday that court documents showed his former employer, Harbor City Capital, received a $625,000 deposit from a company Intrater controlled. The documents are part of an ongoing case the Securities and Exchange Commission brought against Harbor City Capital, which charged the entity with being a “classic Ponzi” scheme that repaid its early investors with cash from later buyers-in, and with diverting millions to founder Jonathan Maroney.

But a more thorough review of the 750 pages of exhibits the SEC filed reveals additional links to the ruins of the communist superstate, where Vekselberg and other elites snatched up freshly privatized state assets and built titanic fortunes. Many of these oligarchs became courtiers to President Vladimir Putin and faced Western sanctions after the first Russian invasion of Ukraine in 2014, which left them desperately searching for ways to stash and retrieve capital overseas.

There is no direct evidence Harbor City Capital assisted such people. But what is absolutely clear, from the court documents, is that Santos’ ex-employer paid an unnamed individual $426,000—in the form of deposits in the National Bank of Uzbekistan.

Because the documents do not affix an exact date to any of the transactions, it is impossible to tell whether these deposits came before or after Intrater’s $625,000 advance. However, the SEC characterizes the $426,000 as “payments,” and groups them separately from reimbursements to investors.

Uzbekistan, a former Soviet state, has sought to maintain some independence from the Russian Federation since the two separated in 1991. But it has maintained close ties to the Eurasian Economic Union and other Russian-led financial institutions, and has received direct investment from Vekselberg and his energy and aluminum company Renova Group.

But the SEC case shows yet another connection to another fragment of the shattered USSR—one nearer and dearer to the Kremlin.

In an email dated Nov. 12, 2015, Maroney told an investor inquiring as to the whereabouts of their dividends that he was out of the country: in Belarus, to be precise.

“I’m in Europe on our investor tour and for the global investor summit we’re hosting in Minsk,” Maroney wrote.

The SEC case calls Maroney’s honesty and integrity into question, but the agency’s exhibits include another email sent to a different concerned customer a few days later in which the Harbor City Capital founder also referred to a European “global investor summit,” though he did not mention the event’s precise location.

Minsk is the capital from which Putin’s ally Alexander Lukashenko has reigned over Belarus since 1994, incurring Western sanctions against himself and his associates for human rights abuses and election rigging. Lukashenko bound Belarus into an economic and military “union state” with Russia with a series of treaties signed in the late 1990s, and allowed Putin to launch his unprovoked assault upon Ukraine from Belarusian territory.

Minsk is a strange place to go hunting for new sources of capital, argued one former U.S. ambassador to the country.

“Belarus is not a hot investment item,” said Ambassador Kenneth Yalowitz, who served during the Clinton administration, and who noted the fraught political situation in Eastern Europe after the first Russian invasion of Ukraine. “Somebody putting on an investment conference in Belarus in 2015, I would not be surprised if there are ulterior motives, political or financial.”

Santos, who worked for Harbor City in 2020 and 2021, and Maroney did not respond to repeated requests for comment.

Intrater declined to comment on the record for this story.

When The Daily Beast first reached out to Santos in November about the financial support he received from Intrater and his wife, a person who answered the congressman’s phone but denied being him asserted that the national GOP had arranged most of the large donations he had received. But the Washington Post obtained video of an internal Harbor City Capital meeting in which Santos identified Intrater’s firm as “a client” of his.

Intrater saw most of his assets frozen thanks to sanctions against Vekselberg, and he battled the U.S. Treasury Department for years to recover access to his money—particularly to funds his companies had loaned members of the family of late music legend Prince while they waited upon the adjudication of their star relative’s estate. Curiously, a member of the family brought a lawsuit in Missouri in 2020 against Intrater and a company with a similar name to the entity the financier used to invest in Harbor City Capital: FEA Innovations.

The phone number on the page is a line in Intrater’s office. It is unclear how this company might interact with Vekselberg’s holdings in Russia’s massive aluminum industry. Despite Intrater’s failure to persuade courts to relax the strictures on his fortune, the Treasury Department struck an out of court deal with him in October 2021.