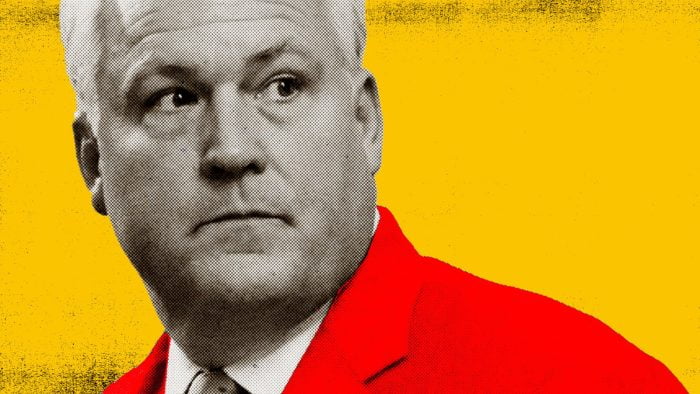 A staffer for Herschel Walker’s Senate campaign has alleged to The Daily Beast that longtime Republican activist Matt Schlapp made “sustained and unwanted and unsolicited” sexual contact with him while the staffer was driving Schlapp back from an Atlanta bar this October.

Look into your heart?

The staffer said the incident occurred the night of Oct. 19, when Schlapp, chair of the American Conservative Union and lead organizer for the influential Conservative Political Action Conference, “groped” and “fondled” his crotch in his car against his will after buying him drinks at two different bars.

The staffer described Schlapp, who had traveled to Georgia for a Walker campaign event, as inappropriately and repeatedly intruding into his personal space at the bars. He said he was also keenly aware of his “power dynamic” with Schlapp, widely regarded as one of the most influential figures in national conservative politics.

Schlapp, the staffer recalled, said he had wanted to spend the evening discussing the staffer’s professional future.

“It was a public space, and I was thinking that he got the hint. I did not want to embarrass him,” he said. “But it escalated.”

We are withholding the staffer’s name at his request, citing concerns of drawing attention to himself while embarking on his first weeks in a new job in Republican politics. He said he would come forward with his real name if Schlapp denied his claims.

In a statement to The Daily Beast, Schlapp attorney Charlie Spies called the allegations an “attack” and said Schlapp “denies any improper behavior.”

“This appears to be now the twelfth Daily Beast piece with personal attacks on Matt Schlapp and his family. The attack is false and Mr. Schlapp denies any improper behavior. We are evaluating legal options for response,” the statement said.

The staffer, in his late thirties, recalled that while he drove Schlapp back to the hotel, Schlapp put his hand on his leg, then reached over and “fondled” his crotch at length while he was frozen in shock, calling it “scarring” and “humiliating.” When they arrived at the hotel, the staffer said Schlapp invited him to his room. The staffer said he declined and left “as quickly as I could.”

He informed the campaign about the incident the next morning.

“What is wrong with me? This is OK to happen?” he said in one of the videos. “I don’t know what I did. It’s very sad that this is OK.”

In another video, the staffer narrated the events “in regard to Matthew Schlapp, chairman of CPAC, who approximately two hours ago put his hands on me in a sustained and unsolicited and unwanted manner.”

“Matt Schlapp of the CPAC grabbed my junk and pummeled it at length, and I’m sitting there thinking what the hell is going on, that this person is literally doing this to me,” the staffer said in the video.

“I’m supposed to pick this motherfucker up in the morning and just pretend like nothing happened. This is what I’m dealing with,” the staffer continued. “This is what I got to do.”

The staffer’s communications with the campaign the next day, along with further exchanges with Schlapp, were documented in call logs and text messages, which the staffer shared with The Daily Beast, as described below.

At 7:26 a.m., Schlapp sent a text saying, “I’m in the lobby.” One minute later, the staffer called his supervisor, followed by a call with a senior campaign official. The staffer said the senior official was “immediately horrified” and pulled him off the driving duty, instructing him to tell Schlapp in writing that he’d made him uncomfortable.

Right after that call, the staffer sent Schlapp a text.

“I did want to say I was uncomfortable with what happened last night. The campaign does have a driver who is available to get you to Macon and back to the airport,” he texted, providing the name and phone number of the driver.

“Pls give me a call,” Schlapp replied, followed by, “Thx.” Schlapp then called him three times over the next 20 minutes, according to phone records reviewed by The Daily Beast.

When the staffer did not answer or return the calls, Schlapp sent another text, asking him to look “in your heart” and call back.

“If you could see it in your heart to call me at the end of day. I would appreciate it,” Schlapp texted at 12:12 p.m. “If not I wish you luck on the campaign and hope you keep up the good work.”

The staffer said he never called, and has not had any communication with Schlapp since that text. Schlapp, who has been married to conservative commentator and consultant Mercedes Schlapp since 2002, never asked the staffer what had made him uncomfortable.

In interviews, the staffer was emphatic that throughout the ordeal he felt “nothing but support” from Walker campaign officials, saying he never felt pressure and was given “complete autonomy” over how to move forward. The options included legal and therapeutic support, as well as pressing charges.

But the staffer declined to take legal action at the time, telling The Daily Beast he was concerned that speaking out about Schlapp could carry professional consequences and endanger career advancement. (The staffer had previously accompanied Mercedes Schlapp when she visited Wisconsin during the 2020 election.) He also said he felt that going public at the time would only further aggravate what he described as the “circus of scandals” surrounding Walker’s campaign just weeks out from the election. However, he said he is still weighing his options, especially if Schlapp denies the allegations and does not step down from his post at the ACU.

It’s not clear whether Walker himself was made aware of the allegations. He did not reply to a request for comment.

A senior campaign official told The Daily Beast that the campaign had no further contact with Schlapp after the incident and did not believe Schlapp took them up on the private driver. The driver told The Daily Beast he did not recall Schlapp, and could find no record of any passenger with that name in his client logs.

Schlapp—a veteran GOP operative whose decades in the upper echelons of the Republican Party include gigs in Congress and the White House—carries enormous clout in conservative politics. The organization he chairs, the ACU, hosts the annual CPAC events, magnets for die-hard conservative politicians which in recent years have been criticized as an increasingly heated incubator for radicals within the party.

While Schlapp has personally welcomed the LGBTQ community at the conference, CPAC routinely draws criticism for embracing anti-LGBTQ extremists.

In Feb. 2015, the year Schlapp assumed his ACU leadership, the Log Cabin Republicans—an advocacy group for gay conservatives—complained that CPAC had blocked them as a sponsor for the third straight year. A week later, Schlapp reversed that policy.

“If you are a conservative who is gay, you have a right to be here,” Schlapp said, adding that “doesn’t mean we water down our principles.”

But given the type of guests and rhetoric that enjoy a warm home at CPAC—while the GOP itself increasingly embraces dangerous anti-LGBTQ rhetoric—gay rights advocates have blasted the ACU’s outward efforts at inclusivity as disingenuous and exploitative.

Schlapp, a devout Catholic, has personally taken heat from members of the far right for his acceptance of LGBTQ Republicans, while some conservatives have bluntly denounced Schlapp’s nominal acceptance of the queer community as a betrayal of Christian conservative values.

The criticism flared last year when CPAC hosted an overseas conference in Hungary, whose president, Viktor Orbán, has imposed increasingly oppressive restrictions on LGBTQ citizens. In August, Orbán came to CPAC in Dallas, where he spouted a “hardline stance on gay rights” and received a standing ovation.

Schlapp has also come under fire for his defense of alleged sexual abusers like former President Donald Trump and Supreme Court Justice Brett Kavanaugh, who partied at the Schlapps’ home this December alongside Rep. Matt Gaetz (R-FL), the subject of a federal sex trafficking investigation.

But when it comes to sexual assault allegations against Democrats, Schlapp hasn’t held his fire, repeatedly targeting President Joe Biden for an unsubstantiated accusation from the 1990s.

“With 5 daughters I’d prefer Biden to be several doors down, not next door,” Schlapp tweeted when those claims first surfaced in 2019.

At the time, Schlapp was entertaining a Senate bid himself. A year later, Schlapp had dropped the political ambitions, but not the mudslinging at Biden.

“Thinking back on the Senate of the 1990s: was there a way for a female staffer who was a sexual assault victim to get fair treatment from an institution that was geared toward protecting senators of both parties,” he wrote on Twitter in 2020. “Biden stressing this event was 27 yrs ago is a bad strategy.”