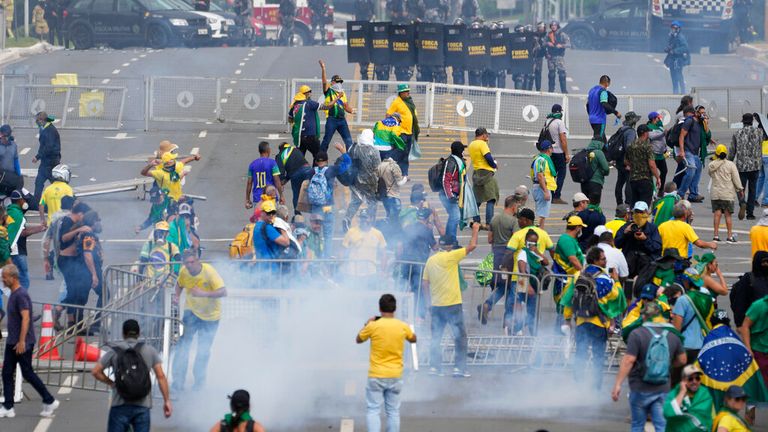 Same people running and funding it too. This is where Merrick Garland could have stepped in and stopped it long ago by going after the funders, plotters and planners of the J6 Capitol attack. But because he’s an ineffective AG, he allowed many of the exact same people to plot, plan and fund the actions in Brazil. The list of names is the same. Steve Bannon, Jason Miller, Ali Alexander and the usual suspects from January 6th.

Mere days after the two-year anniversary of Donald Trump supporters storming the US Capitol building on January 6, history has repeated itself as backers of the ousted Brazilian president Jair Bolsonaro invaded the country’s Congress on Sunday.

Bolsonaro – the hard-right politician who oversaw record levels of deforestation in the Amazon during his time in office – lost October’s election to left-winger and former leader Luiz Inácio Lula da Silva, who won with just over half of the total votes cast.

The new president, known to many simply as ‘Lula’, was inaugurated on 1 January, but his return to the top job has sparked fury among so-called Bolsonaristas who targeted the Supreme Court, Congress and the presidential palace in the capital, Brasília.

They have called on the military to help depose Lula from his elected position, and local media reported protesters posed for selfies in the congressional chamber and ransacked official buildings – descriptions which sound all too similar to what unfolded in the US in 2021.

Other haunting parallels to the violent opposition to the US Congress certifying the win of President Joe Biden include police officers appearing to stand and photograph the invasion, and another officer on horseback being attacked and beaten to the ground.

Capitol police officer Brian Sicknick suffered two strokes and died of natural causes after the US riot, which saw him “injured while physically engaging with protesters”.

Declaring a “federal security intervention” in the capital until the end of January, Lula said in a press conference: “These vandals, who we could call fanatical Nazis, fanatical Stalinists … fanatical fascists, did what has never been done in the history of this country.

“All these people who did this will be found and they will be punished.”

Meanwhile, Bolsonaro has been seen eating Kentucky Fried Chicken in Orlando, Florida, to which he reportedly fled ahead of Lula’s inauguration, which he missed.

US Democrats are now calling on the Biden administration and local authorities to deport the ex-president back to Brazil following the violent scenes in his home country.

Texas representative Joaquin Castro told CNN he “should be extradited” and that he “basically used the Trump playbook to inspire domestic terrorists to try to take over the government”.

Twitter users have also compared scenes to January 6, with Progressive International general coordinator David Adler sharing footage of protesters breaching barricades and adding: “Unreal. The imagery of the unfolding insurrection in Brasilia is *identical* to that of the January 6 riot at the Capitol.”

Another account posted an image of Bolsonaristas browsing through files and commented: “It’s amazing how the storming of Congress in Brazil is identical in every way to January 6, even as far as the candid photos of hooligans rifling through private documents that will clearly be used in indictments later.”

More than 400 people have been arrested following the riot, while CNN Brazil reports police have regained control of state buildings.