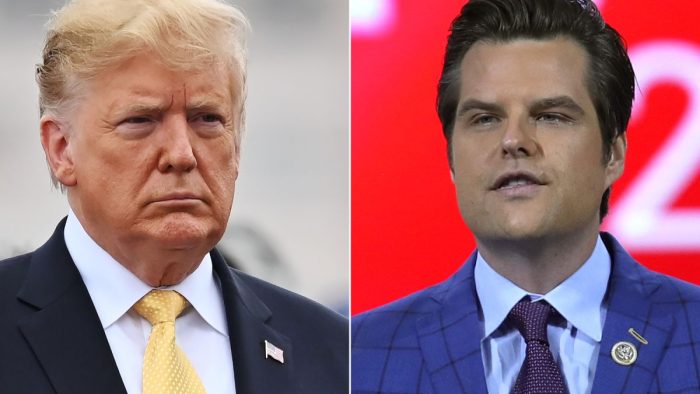 Gaetz says Trump’s endorsement of embattled Republican ‘change neither my view of McCarthy, nor Trump, nor my vote.’

Gaetz told Fox News Digital that Trump’s endorsement of McCarthy for speaker has not changed the congressman’s view on the former president or GOP leader, nor has swayed his vote.

“Sad!” Gaetz said in a Wednesday statement. “This changes neither my view of McCarthy, nor Trump, nor my vote.”

Gaetz has led the House Freedom Caucus charge against the GOP leader’s speakership bid, where he and 19 other Republican members have frozen the House in opposition to McCarthy while solidifying their support behind Rep. Jim Jordan of Ohio.

Jordan, however, has said that he does not want the job and endorsed McCarthy for speaker on the House floor on Tuesday, encouraging holdouts to vote for the GOP leader. Gaetz has pointed to Jordan’s hesitance to seek the job as a mark of a good leader.

Wednesday saw Trump break his silence on the contentious House speaker race that saw three ballots for the first time since 1923.

Rep. Jim Jordan, R-Ohio, has been nominated by the GOP holdouts for speaker. Jordan, however, does not want the job and endorsed McCarthy for speaker on the House floor on Tuesday, encouraging holdouts to vote for the GOP leader. (Matt McClain/The Washington Post via Getty Images)

“Some really good conversations took place last night, and it’s now time for all of our GREAT Republican House Members to VOTE FOR KEVIN,” Trump posted on Truth Social.

“CLOSE THE DEAL, TAKE THE VICTORY, & WATCH CRAZY NANCY PELOSI FLY BACK HOME TO A VERY BROKEN CALIFORNIA,THE ONLY SPEAKER IN U.S. HISTORY TO HAVE LOST THE ‘HOUSE’ TWICE! REPUBLICANS, DO NOT TURN A GREAT TRIUMPH INTO A GIANT & EMBARRASSING DEFEAT. IT’S TIME TO CELEBRATE, YOU DESERVE IT,” the 2024 presidential candidate continued.

“Kevin McCarthy will do a good job, and maybe even a GREAT JOB – JUST WATCH!” Trump predicted.

The House voted to elect a speaker three times Tuesday after McCarthy repeatedly failed to secure enough support to win a majority of members present. It was the first time since 1923 that the House failed on the first vote for a speaker.

Though McCarthy has Trump’s support, he is opposed by 20 or so GOP lawmakers who argue that he is insufficiently conservative and claim he has failed to make certain assurances about rules changes that would decentralize power in the House.

Democrats were united in support for Rep. Hakeem Jeffries, D-N.Y., to be the next speaker over the three votes and many of their members mocked the GOP divisions on social media and in comments to the press.

The House will continue voting today until a speaker is elected.