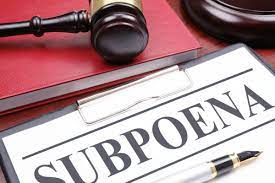 At the end of the J6 committee hearing today, and on a motion by Liz Cheney, the J6 committee voted to subpoena Donald Trump to testify as to his involvement in the insurrection, and his failure to act to protect Congress during the insurrection. According to Jamie Raskin, Congress has the power to prevent anyone who supported defended or gave aide to anyone involved in an insurrection from holding federal office, up to and including the President.

The subpoena comes more than a year after the committee began investigating the insurrection.

Members of the panel, which held what was expected to be its final hearing before the midterm elections Thursday, had previously said that they were still considering seeking an interview with Trump or former Vice President Mike Pence. Sources familiar with the committee’s plans told NBC News of the subpoena earlier Thursday.

The panel’s chair, Rep. Bennie Thompson, D-Miss., said the panel had an “obligation” to hear from Trump.

“This is a question about accountability to the American people. He must be accountable. He is required to answer for his actions,” Thompson said, acknowledging the move as a “serious and extraordinary action.”

The resolution to subpoena Trump passed with the support of all members, 9-0.

The resolution was introduced by Rep. Liz Cheney, R-Wyo., who called Trump the riot’s “central player.”

The subpoena comes more than a year after the committee began investigating the insurrection and despite multiple members of Congress previously acknowledging that it was unlikely Trump would comply.

Still, subpoenaing the former president had been under consideration for a while and has been an active topic of discussion among committee members. On his way to the hearing, Thompson told reporters the panel had not yet ruled out a subpoena for Trump. He said at the start of the hearing that the committee would take a vote “based on new evidence.”