Zelensky: ‘What is the end of War For Us? Victory’ 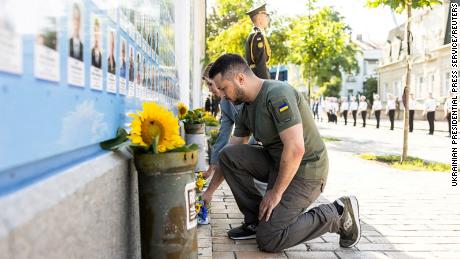 Ukraine’s Independence Day, which on Wednesday marked the 31st anniversary of when the country voted to break with the Soviet Union, has been a more somber affair this year, with officials attending memorials and issuing warnings that Moscow could carry out missile attacks against Ukrainian cities.

While previous years have been marked by celebrations and parades, Wednesday’s commemoration comes exactly six months after Russia’s invasion of the country began.

President Volodymyr Zelensky marked the day with an emotional address that spoke of the Russian invasion as a new independence day — the day Ukraine had to fight for its freedom, rather than simply voting for it at the ballot box.

“A new nation emerged on February 24 at 4 a.m. Not born, but reborn. A nation that didn’t cry, didn’t scream, didn’t get scared. Didn’t run away. Didn’t give up. Didn’t forget,” Zelensky said Wednesday.

He added: “Every new day is a new reason not to give up. Because, having gone through so much, we have no right not to reach the end. What is the end of the war for us? We used to say: Peace. Now we say: Victory.”

Across the country, Ukrainians paid tribute to those who have been killed in military action since the invasion began. Foreign leaders, such as UK Prime Minister Boris Johnson, also visited Kyiv.

In the capital, Zelensky and first lady Olena Zelenska visited the Memory Wall of Fallen Defenders of Ukraine. In the Western city of Lviv, visibly emotional family members of fallen soldiers attended a ceremony at the memorial, the Field of Mars.

Ukraine’s President Volodymyr Zelenskiy and his wife Olena visit the Memory Wall of Fallen Defenders of Ukraine in Kyiv on August 24.

The muted commemorations come after the head of Kyiv’s Military Administration, Maj. Gen. Mykola Zhyrnov, said events were banned in the capital and other cities so that security forces could respond more efficiently to potential Russian attacks.

In lieu of a parade, wrecked and captured Russian military vehicles, including tanks, were placed on Khreshchatyk, Kyiv’s main street, as a testament to Moscow’s failed attempt to capture the capital in the early weeks of the war.

‘Not that easily scared’

On the eve of Independence Day, crowds of people were seen in Khreshchatyk, inspecting the display. Some children crawled up the rusty metal carcass of a tank, while others posed for pictures by the mangled vehicles.

Liubov, who asked for her last name to not be published, said she turned up to show the “scrap metal parade” to her 8-year-old son, Illia.

As Illia climbed on a Russian combat vehicle, Liubov described the parade as “symbolic,” saying “a lot of people in Kyiv (have forgotten) about war, so I think this is a good reminder.” 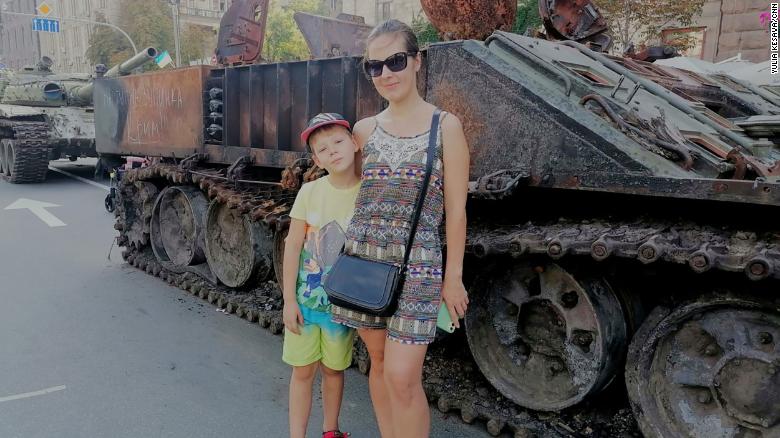 Liubov says she won’t leave Kyiv despite the risk of a Russian attack.

Her husband, who is fighting on the front line, has implored her to leave the capital for their summer home 50 kilometers (31 miles) away, she said. But she has refused to go.

Even if “there are massive missile strikes on Kyiv (on Wednesday), we will not leave,” she said, explaining she has an emergency bag at home, with enough clothes and overalls “in case of radiation pollution … in case of missiles. We are not that easily scared by them anymore.”

“I don’t feel festive about (Independence Day), I rather feel sad,” she added. “Because I understand what is going on and my husband and brother are on the front line.”

Holding a Ukrainian flag, another onlooker told CNN she also has relatives fighting against Russia.

“My father is on the front line, a lot of my relatives are on the front line … so tomorrow is not a celebration per se, but honoring and feeling independence, because this time it will feel differently than for the previous 30 years,” said Daria, 35, who declined to give her last name. 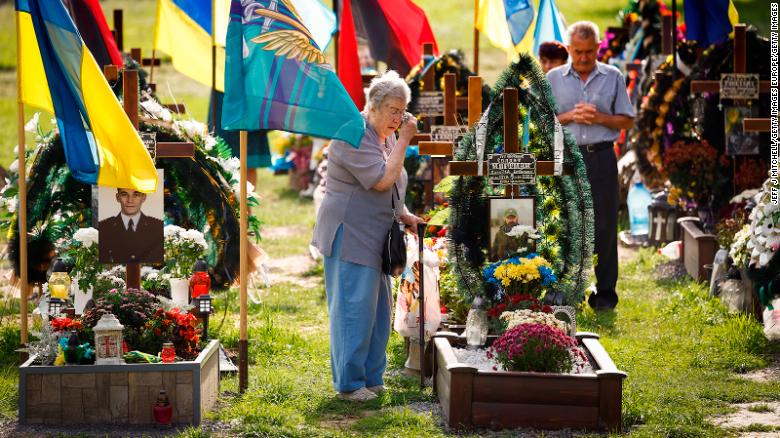 Family members of fallen soldiers attend a ceremony at the memorial, the Field of Mars.

Zelensky warned Tuesday that Russia may step up efforts to launch attacks, including missile strikes, on “infrastructure facilities or state institutions” around the holiday. The US government joined the chorus of concern, telling Americans on Tuesday to leave the country immediately.

US President Joe Biden marked Ukraine’s Independence Day Wednesday by reiterating the US’ commitment to Ukraine with a new $2.98 billion investment in security assistance.

“This will allow Ukraine to acquire air defense systems, artillery systems and munitions, counter-unmanned aerial systems, and radars to ensure it can continue to defend itself over the long term,” Biden said in a statement Wednesday.

“Today is not only a celebration of the past, but a resounding affirmation that Ukraine proudly remains — and will remain — a sovereign and independent nation,” Biden said, adding that the US “looks forward to continuing to celebrate Ukraine as a democratic, independent, sovereign and prosperous state for decades to come.” 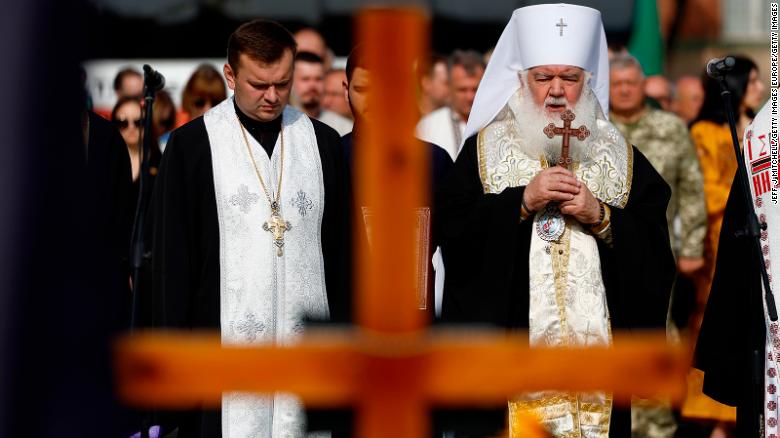 Dignitaries and families attend a ceremony for the fallen soldiers of Ukraine on the Field of Mars on Wednesday in Lviv.

British Prime Minister Johnson met with Zelensky during his visit. He announced a $66 million aid package for Ukraine, telling the country that it “can and will win” the war against Russia.
Portugal’s Foreign Minister João Gomes Cravinho was also among foreign leaders in Kyiv.

In Brussels, a giant Ukrainian flag was unrolled on Grand-Place during an event attended by President of the European Commission, Ursula von der Leyen.

In a Twitter message on Wednesday, President of the European Council Charles Michel said: “Your future is our common future. And it’s why we want to support you as much as we can to protect and to defend your independence, your sovereignty and your territorial integrity. We are with you.”

On Kyiv’s Khreshchatyk on Tuesday, many who spoke to CNN shared worries about a possible Russian attack on Wednesday.

After six months of conflict that have sent Ukraine’s economy into a tailspin and disrupted almost every part of daily life, the weariness was tangible. 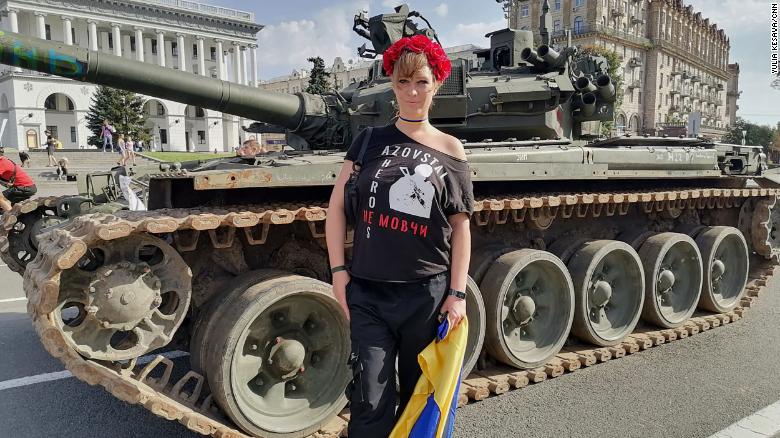 Daria is also worried about an attack on Independence Day.

“I don’t feel festive about tomorrow, not in a festive mood,” said 29-year-old Oleksii, explaining that he is worried about missiles being fired on the capital.

“My hatred for Russians has grown so big that it’s tearing me apart,” said Anna, 68, who declined to give her surname for safety reasons.

The clinic that she works in has told her to work remotely for the next few days. “I’ve worked (throughout) the war … sometimes getting home under shelling,” she said.

She described Russian President Vladimir Putin as unpredictable, like “a monkey holding a grenade.”

“He says one thing, does something different and nobody can guess what’s actually on his mind,” she said.

CNN’s Kyle Blaine and Radina Gigova contributed to this report.