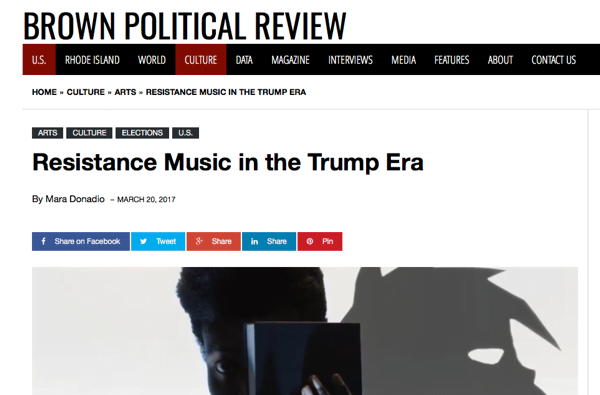 Resistance Music in the Trump Era

By Mara Donadio MARCH 20, 2017 – “Donald Trump’s election has elicited resistance marked by activism and political opposition spanning the entire partisan spectrum, from all corners of the world, expressed by a multitude of media. Perhaps most interestingly, resistance has cropped up through music. Numerous artists of all genres have released songs since November that have implicitly or explicitly expressed opposition to the Trump administration.

Indie group Arcade Fire released their single “I Give You Power” on Inauguration Day with the message, “it’s never been more important that we stick together and take care of each other.” The song aims to remind the administration that power comes from the people and that the people “can take it away.” Meanwhile, on the eve of the Inauguration, the hip-hop group Gorillaz came out of retirement to release their first music video in six years for their song “Hallelujah Money.” The music video features jarring images that augur the nefariousness of a Trump presidency, and the lyrics mention the building of walls and questions the corrupting influence of power and money.” READ MORE: