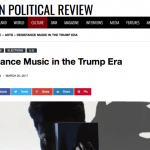 Resistance Music in the Trump Era By Mara Donadio MARCH 20, 2017 – “Donald Trump’s election has elicited resistance marked by activism and political opposition spanning the entire partisan spectrum, from all corners of the world, expressed by a multitude of media. Perhaps most interestingly, resistance has cropped up through music. Numerous artists of all genres have released songs since November that […]