Politics and pop music: Will frequent adversaries ever come together? | Justice Through Music 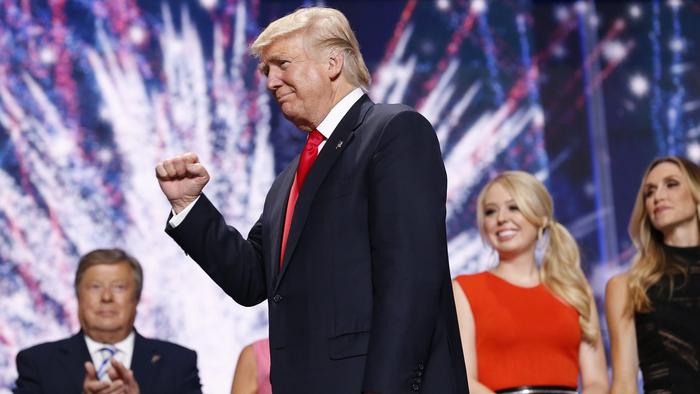 After Republican presidential nominee Donald Trump made his opening-night appearance to the strains of Queen’s “We Are the Champions,” the group quickly shot out a message to more than 1 million Twitter followers that it was “an unauthorized use at the Republican Convention against our wishes.”

But was it illegal?

In addition to Queen, the Rolling Stones, George Harrison’s estate and the Turtles, among others, went public denouncing the use of their respective songs during the GOP convention.

Such protestations have become such a fixture of election cycles that even “Last Week Tonight” host John Oliver made a joke about it.

So, is this just an election-year pastime, or do artists have a legitimate gripe?

“The simple answer is, it’s not that simple,” said Christine Lepera, co-chair of the entertainment and intellectual property litigation practice group at Mitchell Silberg & Knupp in Los Angeles.

Campaign officials commonly reply that by acquiring blanket licenses through performing rights organizations such as the American Society of Composers, Authors and Publishers (ASCAP) or Broadcast Music Inc. (BMI), they have complied with requirements of constitutional protections for copyrighted works.

Nevertheless, the presence of such licenses at a convention hall hasn’t mollified musicians, their publishers or managers, even though they receive royalty payments for their music.

“The basic idea is that the use of an artist’s work in the context of a political campaign or other advertisement associates that artist with the advertisement,” intellectual property litigator Josh Schiller, a partner in the New York-based firm Boies Schiller & Flexner, told The Times.

Harrison’s estate and the Rolling Stone echoed  the Queen camp’s language in tweets of their own after Harrison’s Beatles hit “Here Comes the Sun” and the Stones’ “You Can’t Always Get What You Want”  turned up in high-profile moments at the  GOP convention.

“I think the artists and their songs stand for something,” said Elliot Roberts, longtime manager of Neil Young, who went public asking Trump to  stop using his song “Rockin’ in the Free World” earlier in his campaign.

“From the artists’ point of view, there is a moral issue here, not a legal issue. ‘This guy is using my material.’ Especially when you are talking about the political arena, you want someone using your material who has your core beliefs, period.”

There have been a few high-profile cases where musicians did seek legal redress when politicians inserted their songs into campaign ads.

Jackson Browne sued John McCain in 2008 for using his recording of “Running on Empty” while battling Barack Obama for the presidency. Additionally, Talking Heads songwriter and lead singer David Byrne sued Florida senatorial candidate Charlie Crist in 2010 for using the group’s recording of “Road to Nowhere” in his contest against Marco Rubio.

Both of those cases were settled for undisclosed payments to the musicians, along with public apologies.

And that is part of the reason the issue keeps resurfacing. Those settlements did not create legal precedents that might dissuade other politicians from continuing to test the boundaries.

But if a recording is used in a political campaign ad or a spotlight moment during a televised speech — what are defined as audiovisual works — a synchronization license is required for the recording as well as a license for the composition itself, which affords payment to the songwriter and the work’s publisher.

Then why don’t musicians sue rather than simply send out public statements?

“The question is what kind of relief can you get?” Schiller said. “Is a judge going to give you an injunction to say he can’t use it? You have to show that there would be irreparable harm. If Queen is offended by that association, that could be sufficient to show irreparable harm. The question is a factual one: When people see Trump onstage with Queen in the background, do they think Queen supports Trump — do they draw that conclusion?”

“I can tell you that in Jackson’s case, he didn’t want to sue McCain and the RNC. We said, ‘You need to take this down and talk to us about a license,’ which Jackson tends to donate to charity. ”

Publishers often leave decisions about what action to take up to the songwriters they represent, a source at once major publisher said. There’s no uniform avenue for redress, the source added, because the degree of control musicians have over how their music is used can vary depending on terms of the publishing contract.

With the rise in recent years of social media, it’s become more effective, many sources agree, for musicians and their representatives to go public, rather than seek legal remedies.

“I can see that in many situations, people making those assessments might decide that the press [coverage] may be more valuable, so they’ll put out a statement that this is not something we’ve approved,” Lepera said. “In each case, the decision comes down to whether it’s worth it to go to court. But just because someone doesn’t take a case to court doesn’t mean that the usage is not illegal.”

'Politics and pop music: Will frequent adversaries ever come together?' have no comments