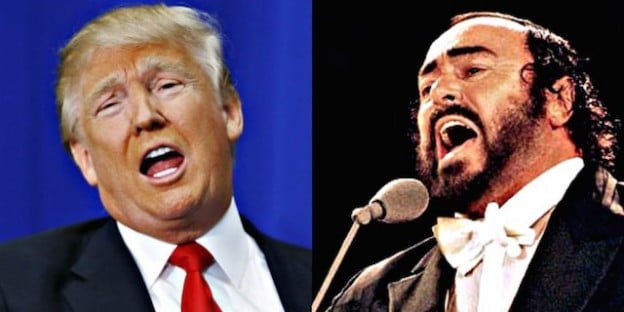 Throughout history, Opera has been a reflection of the events occurring around it. Mozart’s The Magic Flute contained both the continued repression of women as well as the advancing ideals of The Enlightenment at the end of the 1700s. In the middle of the 1850s, Verdi’s La Traviata sang the joys of the potential future of feminism, though Verdi would not have known his heroine would become a feminist icon. Berg’s Wozzeck showed us that if a man, particularly a soldier, sacrifices his ideals for those over his irrational superiors, in the aftermath of World War I, his spirit will be destroyed.

Now, in the year 2016, the politics of Giacomo Puccini’s Turandot have caused yet another nettle to dig into presidential hopeful Donald Trump’s campaign ideals. The Donald was using the famous deceased tenor Luciano Pavarotti’s recording of “Nessun Dorma” from Turandot during his political rallies. The estate of Pavarotti issued a statement, following in the footsteps of members of R.E.M., Queen, and The Beatles, asking the campaign to cease use of the recording. According to the Pavarotti estate, Donald Trump’s beliefs are “incompatible” with Pavarotti’s “values of brotherhood and solidarity.” The aria includes a stirring conclusion, set to the words “Leave, oh night! Set, stars! Set, stars! At sunrise I will win! I will win! I will win!”

Turandot has always been an opera of fraught emotion and concealed political underpinnings since its premiere in April of 1926. Puccini, in recent years, has been outed as a supporter of Mussolini and Fascism. The famous composer of such operas as Madame Butterfly, La Boheme, and scores of others, sent a letter to a librettist in 1922 saying that “Mussolini was undoubtedly sent by God for the salvation of Italy.” Slate.com quotes Puccini analyst Arman Schwartz in saying that “it is quite easy to read Turandot as a political allegory, one consistent with fascism’s own narrative of the degradation of post-World War I Italy and of Mussolini’s heroic rise.” Schwartz also likens “the very modern-seeming crowd [of the opera’s chorus], is as violent as it is irrational and easily swayed” to Trump’s fanatic supporters.

Slate.com also pithily ponders whether “Trump has ever actually attended opera in New York (though a 1992 review of the Metropolitan Opera’s Turandot proclaimed it “as vulgar as Trump Tower”).” This new bump in the road is a welcome addition to Trump’s “Weekend of Horror” where he simultaneously and repeatedly offended the Khans, the parents of a Muslim American Army captain slain in Iraq in 2004, and his ineptitude in not knowing that Russia had already entered the Ukraine. Taken in conjuncture, these events are whittling away at the cement Trump is building his house of sand on.

Now, I am not against using music to accompany a political event. In the right context, it can even add an air of poignancy to the proceedings, but you have to know the history behind the particular piece and its background. The fact that Trump wouldn’t be branded a Mussolini-ite by choosing this aria, so blatant in its fascist undertones, is almost unbelievable.

When you take the aria and listen to it on your own with a glass of brandy, it is stripped of any political significance, because it isn’t sparking you to dreams of government upheaval. But, when a potential president of the United States choose this anthem to set the tone for his campaign, you know that the good of the American people is not at the forefront of his aspirations.

The aria in itself is gorgeous, with long sustained notes for an able tenor, and I am certainly happy that opera is being heard by a majority of people who would never experience it except during Looney Tunes and Super Bowl Ads. But, as a member of the classical music performing community, I am sickened that an opera is the soundtrack for speeches filled with hate, misogyny, and racism.

The music of opera is one of power, but also one of beauty. When I listen to opera, I hear the soul of the world, aching with passionate vibrations of bigger-than-life heroes. As I’m writing this line, Maria Callas’ recording of Mimi’s aria from La Boheme started to ease into its climax, and I was moved to tears.

I am moved to tears because this music, which is my very life’s blood, is being used to bolster the image of a monster. He has defiled the sanctity of art, as he has defiled the rights of women, minorities, and the disabled. The fact that this aria could be paying while Trump ridiculed a handicapped reporter with a nerve condition or telling another to “go back to Telemundo!” is almost too much for me to bear.

I believe it’s time for the opera community, and the artistic community in general, to speak out as much as we can about Trump glomming onto our life’s work and using it for his smear campaign. I never take politics to heart, but this is the final straw that broke the camel’s back. You can ridicule me, you can scoff at my fellow human beings, but I’ll be damned if I will sit back and watch a man as vindictive and hateful as Mussolini rape the music that is more precious to me than the air that I breathe.

Art, in every form, is a precious jewel, unique in its individuality. Artists take great pride in the masterpieces they create, be they rock bands, YouTube videos, or writing books about obscure Monks of the 15th Century. Artists have always been at the forefront of revolution, and this political climate has forced us to take a stand once again.

So, my fellow artists, take out your pencils, computers, music scores, instruments, and intellects, because its time to march to the beat of our own tune, our resolve steeled against someone who wants to destroy the very fabric of humanity that we love so dearly.

The following have pledged their support for the cause and more will be added upon contact (and, if you are an artist and wish to be included in this cause, send me an email or comment!):

Mary Birdsong, comedienne and star of Reno 911, and YouTube content creator: “Steven, I join you in this call to arms by asking all my rock and roll bros and hoes (rock groups, recording artists, singer-songwriters, etc.) to make a pact: I want you all to AGREE (effective immediately) to only write songs that feature really catchy choruses chock full o’ lyrics denouncing Donald Trump. Look, I know this is asking a lot. But think of it – eventually when recording artist after recording artist and estate after estate refuses to let Trump use their recordings, he’ll have no choice but to choose a NEWLY recorded, super-catchy song that paints him as he really is– a dumb, dangerous idiot. If EVERY new song recorded denounces him, he & his supporters will have no choice but to sing along.

“Steven, I applaud you for reaching out to your opera peeps, and “across the artistic aisle” as well, to people like me who just make silly YouTube videos & sing rock songs. The emperor is wearing no clothes (that were made in America)!”

Jennifer Malone, musician and teacher at School of Rock in Oak Park: “As someone who works with emerging artists and takes great care to pass on a personal discipline of paying for music, honoring artist intent and safeguarding music as a viable career path, is is particularly disheartening when any candidate disregards copyright law and established usage agreements. Trump, as is the hallmark of his campaign, sinks deeper into the abyss by having the audacity to blatantly mock cease and desist orders filed on behalf of rights owners and artists. If a great society is judged by the art it leaves behind, certainly a great tyrant ought to be judged for the art that he steals. Trump is no friend to working artists. I think we can see from this how much he cares for ‘workers’, in general.”

Eric Owens, opera singer at The Met, Chicago Lyric Opera, and beyond: “My thoughts on this subject are a bit broader than just Donald Trump; they’re more about a party that consistently vilifies the National Endowment for the Arts, as to how art needs to pay for and support itself, meanwhile, during campaigns,this party consistently refuses to pay for, or even obtain permission to use music for campaign events. This is not only Hypocrisy 101, but it’s theft of intellectual property. My two cents.”

This has gone beyond being politically incorrect.

This has gone beyond making America great again.

My final words can thus only be from an opera, namely Handel’s Julius Caesar:

(“In the shimmering of arms This my warring soul Will take revenge. Whatever gives it its strength cannot disarm this fighting hand.”)