Tim Kaine, Harmonica in Tow, Often Relies on Music as a Mouthpiece 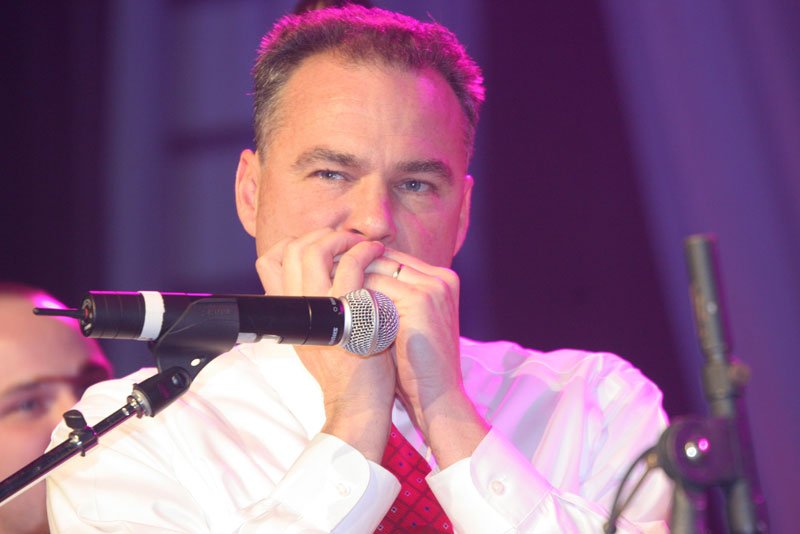 He carries multiple harmonicas in his briefcase. He has played with members of the Dave Matthews Band and the Grateful Dead. And he has been known to show up unannounced at bluegrass jamborees around his home state, Virginia, simply looking to jam.

His time in Virginia has left him steeped in the history of bluegrass and old-time music. Hopping up and down the 330-mile Crooked Road that winds through the heart of bluegrass country in Virginia, he has memorized dozens of standards like “Will the Circle Be Unbroken” and “Man of Constant Sorrow,” along with newer songs like “Wagon Wheel.”

“He’s comfortable on stage,” said Woody Crenshaw, the former owner of theFloyd Country Store, about an hour’s drive southwest of Roanoke, Va., where Mr. Kaine has performed numerous times. “He has a feel for the old-time music of these mountains.”

Mr. Kaine has made music an important part of his political life. He has often “sat in” at bluegrass open jam sessions while campaigning and in office. During his Senate campaign in 2012, he held a promotional contest, “Harmonica With Tim,” in which one lucky person would win not just a dinner with Mr. Kaine, but also a one-on-one harmonica lesson. He had a bluegrass band, No Speed Limit, play his inauguration in 2006 (and he hopped onto the stage for a few songs, naturally).

“So one summer I made it my goal that I was going to learn to play the harmonica,” Mr. Kaine said in a 2005 interview.

The budding teenager would practice at home as much as he could, but given the loud and sometimes discordant sounds that emanate from a beginner’s harmonica, he would save his parents’ ears and sanity and head out of the house to practice.

His skill on the harmonica has allowed him to jam seamlessly with professionals and amateurs, and earn the respect of Virginians, not just as a governor or a senator who has a hobby he likes to use politically, but also as a musician.

“One Sunday I’m there in the circle playing banjo and suddenly TV cameras show up,” said Alan Graf, a lawyer and a musician, who often plays at the Floyd Country Store. “Tim Kaine walks in, and he sits down and someone goes, ‘That’s Senator Tim Kaine,’ and I go, ‘Oh great,’ so much for a relaxed session with cameras beaming at you.”