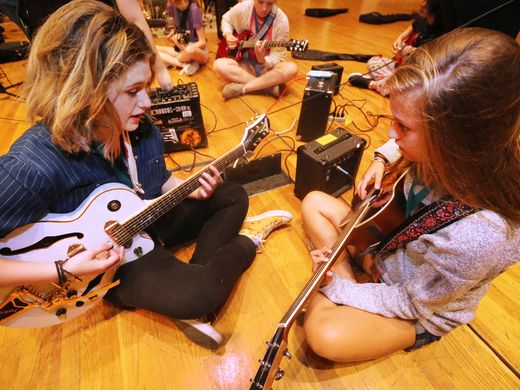 The Southern Girls Rock and Roll Camp still brings dozens of girls ready to learn new instruments and jam with others at Middle Tennessee State University in its 14th year.

But this year, organizers wanted to bring the wider world, with its range of music and its pressing issues, into the camp for its 53 students to talk about.

International artists were brought to Murfreesboro to perform for and teach students at the week-long event, said Sarah Bandy, executive director of Youth Empowerment through Arts and Humanities, which organizes the camp

“We believe a big goal of the camp is having a diverse group of musicians to come here to speak,” Bandy said. “Kids are seeing what’s happening in the world, and they want to make art about it.”

The moves at the camp reflect an organization that wants to focus on the needs of its students and the topics they speak about at camp, including ones revolving around Black Lives Matter and LGBT issues, said Hailey Rowe, the camp’s program director.

“We’re able to take our focus on making sure people know about it’s here to making sure the experience is good for the people who are here,” Rowe said.

The environment allows girls to be themselves as they learn more about music, create bands and listen to others perform and talk about their own experiences.

“The rest of the world is really negative,”  said Lotus Greer, a student from Murfreesboro. “Here, we have support.”

On Tuesday,  campers were starting to get the hang of the instruments they signed up to play. They can choose the guitar, bass or drums. They can also choose to sing.

“By the second day, they ease into what it’s going to be about,” Bandy said. “By Friday, everyone is able to get in front of the microphone and speak and express themselves.

“The transformation is really powerful to see.”

Jerry Coutcher, a Murfreesboro sixth grader, learned quickly that the drums were for her. She and three others were in a beginner-level course for drums and learning basic beats and how to count in time.

“When I first played the drums yesterday, something clicked on stage,” Coutcher said. “It was amazing.”

The Southern Girls Rock and Roll Camp will have its annual public showcase on Saturday afternoon at the auditorium at Wright Music Building at 1439 Faulkinberry Drive. The concert starts Saturday at 2 p.m., and the suggested donation is $10. A silent auction is also set to occur at the showcase.