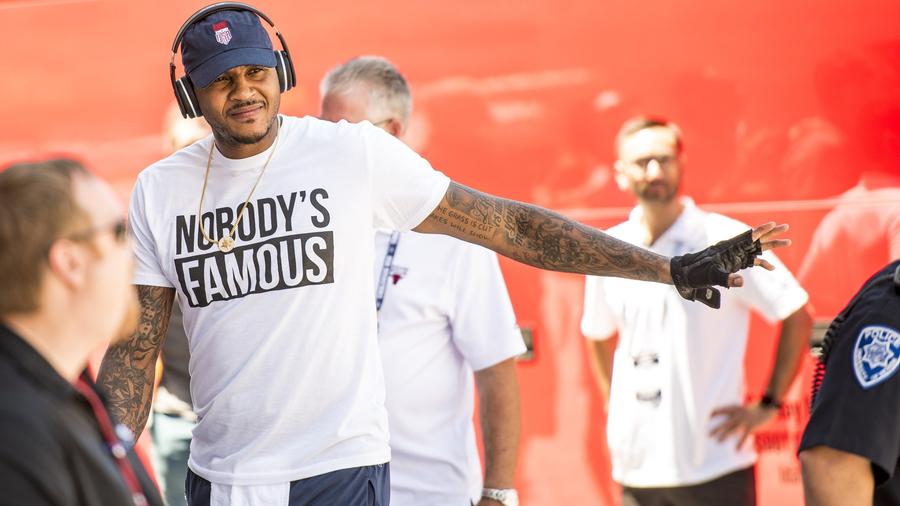 Carmelo Anthony never anticipated how one Instagram post would make him into the NBA’s strongest activist. It was deep into the morning hours the night of the Dallas police shootings and Anthony was glued to his television. A day earlier, Philando Castile was fatally shot by a police officer in suburban St. Paul, Minnesota. The day before that, Alton Sterling was shot by two police officers in Baton Rouge, Louisiana.

Anthony had taken all of it in and finally, at nearly three in the morning, with the glare of the TV in front of him, he felt compelled to speak his mind.

“I was watching the news and there was just so much shit that was happening – back-to-back-to-back,” he said. “A lot of the time, when situations occur, athletes are mute. Their team is telling them not to say anything. Their team is telling them to stay away from politics and religion. Like, those are two topics where athletes never cross that line and talk about. For me, I control my own destiny and I wanted to speak up this time.”

The post was a call to action to other athletes, pleading with them to take action against police brutality. It begat an op-ed in The Guardian, and a similar stand in support of WNBA players who were fined after wearing black warm-up shirts in protest. Then, he recruited Chris Paul, LeBron James and Dwayne Wade to help him open the ESPYs.

“A lot of times, when tragedies happen, they talk about it for a day or two and it’s on to the next event,” Anthony said. “This time, it was an opportunity for me to just say my piece and really make a call to action to the people who can make things happen in the right way.”

On Monday, Anthony took his largest step yet to affect change. Together with other members of the USA Men’s and Women’s Olympic Basketball teams, he organized a town hall meeting at the Challengers Boys and Girls Club in South Central Los Angeles. He invited community leaders, police officers and local kids to speak to one another with one purpose in mind: An open dialogue.

“It was a very honest, direct conversation towards these police officers and the point was well-taken by the officers,” he said of the event. “Those conversations got deep. I know for me, to share some of the experiences I had with police, to have the police hear that, they weren’t expecting that… It was a trust issue: We didn’t trust the police. That’s what’s happening now in these inner city communities: They don’t trust the police.”

VICE Sports sat down with Anthony after the event to discuss his experience, what led to him speak up, and why he doesn’t plan to stop pursuing action. The conversation has been edited for length and clarity.

The Carmelo Anthony who came into the league at 19 was not nearly as vocal as Carmelo Anthony at age 32. What had to develop with you personally to get to this point of becoming so outspoken?

I think that, when one thing happens and you step out there and you say something – you speak on that topic – then another thing happens, then another thing happens and it starts snowballing. Everybody expects you to say something about every single thing and then it’s not impactful. There’s not any kind of empowerment when it comes to that kind of stuff. So much happens, and you really have to pick your battles. A lot of the things that have happened as of late, over the past year or two, have hit home. That was the reason for me to really speak out, because it was in my backyard.

How much added weight does this issue hold for you with you being a father who has a young son?

Is he old enough to understand what’s happening?

Has he asked you any tough questions about it yet. Like, Dad, what is this?

He asks me about Trump [laughs].

What do you tell him?

You had an idea of what might happen going into today. Did anything happen contrary to those expectations? Were you surprised by anything?

Did you get out of your comfort zone? Were you uncomfortable going in?

No, no, no. Honestly, I like to speak on real shit, man. I pick my battles on what I speak on because when I do speak, it’s authentic. It’s genuine. It’s real. And I’ll take the gloves off.

You mentioned that the next steps will happen in individual communities. For you, that means New York. What do you want to be doing there?

I want to sit down with people and keep the conversations going in New York. New York is so big, man – different boroughs, you can impact it in different ways. For me, my focus would be on Baltimore. That’s something that’s small. That’s something that’s my backyard. Police brutality has been going on forever back there. It hasn’t been as public but when the Freddie Gray thing hit, that’s what really sparked everything.

A conversation like this here, in South Central, it’s going to be different from the type of conversation that you’d have if you went to Brentwood or Santa Monica, someplace like that. How do you get communities that are outside of predominantly black neighborhoods to understand the message that you’re trying to convey?

Even if they look – me, for instance, I’m a white male who was raised in an upper middle class neighborhood. I cannot understand police the way that you do.

Right. It’s just a different mindset that we have than middle-class America or upper-class America has towards the police. I feel like I’m on both sides because I’ve been there before and now I’m on the other side.

But how do you make them understand it in a way that they feel moved to do something?

Talking. You’ve got to talk and let them see. I think, right now, they’re seeing it. They’re seeing it because it’s blatant now. You can’t ignore it. Before, when there was police brutality and police killings, they would never broadcast that on TV. Now, they still don’t want to broadcast it on TV but social media is so big that if they don’t broadcast it on TV, there isn’t a need for those networks anymore. Everything is on social media, everything is digital. We’re seeing killings live. We’ve seen five or six killings, live and direct. Those are things we’ve never seen in the US before. That’s stuff that happens overseas, when they show the beheadings and the bombs, live and direct. We’re actually seeing our own people dying in our backyard.

You want to talk to policymakers, people who can change things. That will probably involve having conversations with people who don’t entirely understand.

You mentioned earlier being a kid who ran from the police growing up in Baltimore. Now, you’re having dialogue with them. How did you get to a place in your own life to where you changed your own perspective and began to try and empathize with them?

It’s a fortunate and unfortunate situation, because I was able to get out of my situation through basketball. So I got out of that and, after a while, you start distancing yourself from those daily acts in your life that happen on a daily basis. Interactions with police, running from police, on your block getting pulled over. You start growing away from that and once you see it, it starts bringing back memories and touching home. Now, it kind of pulls you back until when I was 12, 13, 14.