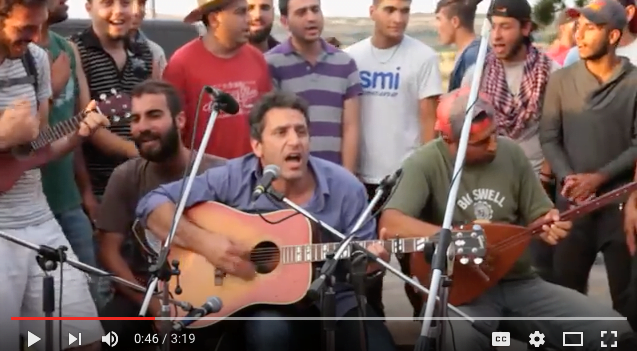 June 20, 2016 – An anthem “No More Lines” has arisen from the refugee camps across Greece. The BORDERLESS TEAM of guitarist/singer Stephen Said and producers Anushay Said and Rory O’ Connor told us about their great video in an email, and we knew we had to get this up; watch the video below. The BORDERLESS TEAM told us, “‘No More Lines’ was recorded live on June 4, 2016 at the Eko Station Refugee Camp near Polykastro, Greece, with hundreds of refugees from many countries as well as relief workers. Additional footage was filmed in numerous official and unofficial refugee camps, settlements and squats across Greece where “No More Lines” was also recorded between May 31 – June 4, 2016, including the Eko Station Camp, Nea Kavala Refugee Camp, City Plaza, Piraeus Port Refugee Camp, BP Station Refugee Camp, Evzoni, Idomeni Refugee Camp (also filmed in March, 2016), Victoria Park Athens, Hara Hotel Refugee Camp in Evzoni/Idomeni.”

“The filming was organized with the help of many individuals, local and global organizations, including but not limited to the General Secretariat of Information and Communication of Greece, UNHCR, MSF, No Border Radio, Eko Project, Together for Better Days, Idomeni Volunteers, Open Cultural Center/Idomeni Cultural Center, We Are Here, Aid Delivery Mission, City Plaza, Society Kitchen, Forgotten in Idomeni, Refugees International, and more.

If you like what you see and hear, please SHARE it as widely as
possible within your social networks, to help build the #WITHREFUGEES and #REFUGEESWELCOME movements across the world. The most powerful thing we can do to counter fascism and anti-migration sentiment is to actually give voice to the refugees themselves. Monday, June 20 is World Refugee Day — but for the people in this video, and millions of others like them all over the world, that day is everyday.”

NO MORE LINES
Words and Music by Stephan Said

I’m just a refugee from a world where people are cruel and living unequally
And I’m getting over, over and over
promises broken, innocents lost

We all know there’s one creation
one creation underneath the sky
Why can’t we live like one people
one people no borders or lines?
(Chorus)