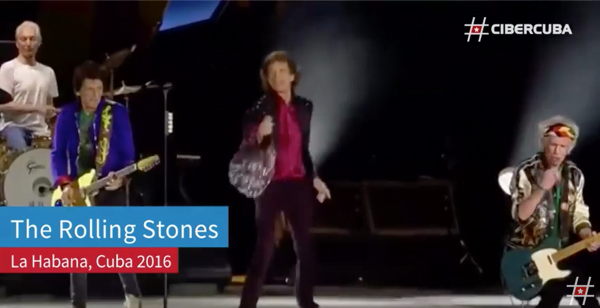 MAR 28, 2016 – The Rolling Stones played a historic concert in Cuba last Saturday, and around 500,000 Cubans who used to have to secretly listen to their music came out to see the free concert that made history. Mick Jagger hinted at the politics of the event at times, and The Guardian reported the frontman said, “We know that years ago, it was difficult to listen to our music in Cuba but now here we are in your beautiful land,” Jagger said in Spanish. “I think that, finally, the times are changing. That’s true, no?” The crowd roared agreement in response. However, Rosa María Paya, a Cuban activist who is working on getting a plebiscite so the Cuban people can elect their own government told The Guardian, [Obama and Jagger] should be aware that their performance is being used by a totalitarian regime as a symbol of an opening that isn’t really taking place. I don’t put my hope in Mick Jagger. He should have made a statement of solidarity.” Read more about the historic concert below, and watch Mick and the boys perform the opening song, “Jumping Jack Flash” in a YouTube video from CiberCuba. Check out tons of the concert footage on the CiberCuba YouTube Channel here.