Event to Highlight DC as the East Coast Cannabis Capital 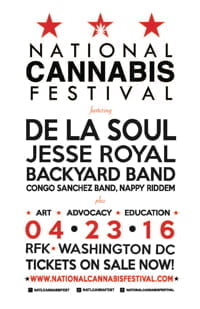 MAR 22, 2016 – The musical lineup for the HUGE National Cannabis Festival on April 23 in DC has been announced. The bands and musicians that will be performing are Del La Soul, Jesse Royal, Backyard Band, Congo Sanchez Band, and Nappy Riddem. The musicians will feature both national and local performers, and will be introduced by pro-cannabis activists, celebrities and politicians. Tommy Chong and Cheech Marin maybe?? That would be awesome!  There will also be booths featuring art, advocacy and education all centered around the awesome cannabis plant. The District of Columbia citizens passed Initiative 71 and lifted cannabis prohibition in DC (the residential area) and will soon be the epicenter if not the east coast cannabis capital. The are many sponsors, such as DC NORML, that JTMP works closely with at the local level here in DC, and we will be covering the event and hope to have music videos up. Check back to JTMP.org after the event.

Check out the National Cannabis Festival website for more info and tickets here: