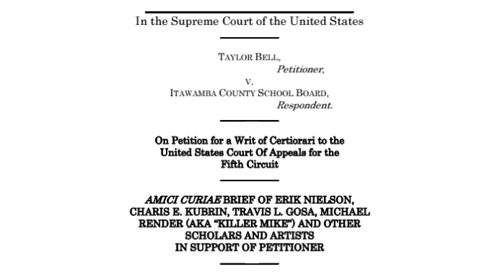 DEC 24, 2015 – In an outrageous move to stifle free speech, a school board in Mississippi suspended Itawamba agricultural high school student Taylor Bell, or “T-Bizzle” back in 2011 for writing a a rap song “P.S. Coaches The Truth Need To Be Told”, that was critical of 2 of the school’s coaches sexually harassing female students and posting it on his Facebook page. Mr. Bell appealed this decision and is fighting it, and after his appeal being rejected in the US Court of Appeals for the Fifth Circuit, his case has an opportunity to be heard by the US Supreme Court. This move by the school board is also racist, because the reasons they gave for punishing Mr. Bell is “the song had violence in it”. Now, prominent Hip-Hop stars have come together and filed a brief with the US Supreme Court on behalf of the Mississippi rapper urging them to hear the appeal by Mr. Bell. Rappers Big Boi, Killer Mike, T.I., Boots Riley, Pharoe Monch, Toni Blackman, Jasiri X, Favianna Rodriguez, as well as free speech professors, all came together and filed a brief asking the court to hear the appeal; pointing out that Johnny Cash never “actually shot a man in Reno just to watch him die” and “Killer Mike has not actually ever killed someone”. The brief also says “Following a long line of rappers, Mr. Bell saw an opportunity to confront injustice.” Read the brief here, and read more about this at NYTimes in an article by Adam Liptak here. Listen to T-Bizzle’s song, “”P.S. Coaches The Truth Need To Be Told” below.