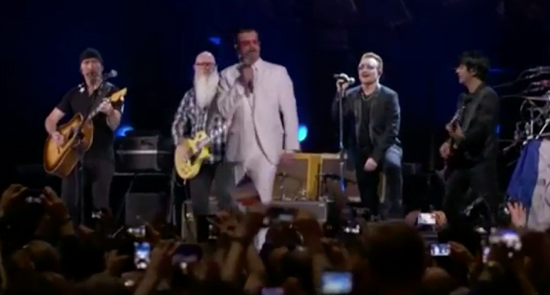 DEC 8, 2015 – U2 played a Paris, France show yesterday and brought the band EoDM onstage with them at the end of the show for a show of unity and support, and to let EoDM play a song. Bono told the crowd, “They were robbed of their stage three weeks ago, and we would like to offer the ours tonight.” EoDM and U2 then played “I love you all the time”. At their Paris show, U2 had the pictures and names of the victims of the Paris attacks and Bono said, “We stand together with the families of those killed in Paris.” Jesse Hughes from EoDM said after the show, “Thank you to France, and thank you to everyone in the world who continues to prove that love, joy, and music will always overcome terror and evil.” Watch the video below from AP, and also a good BBC article about it is below.