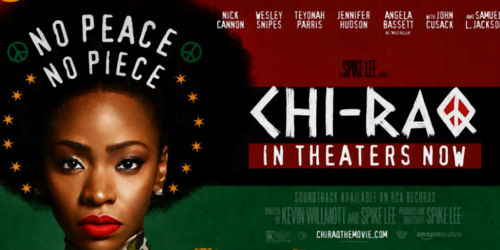 DEC 9, 2015 – Spike Lee’s new movie “Chi-Raq” about gun violence in America, based on the old Greek play Lysistrata where the women hold back sex to try and end the Peloponnesian War, is creating quite a buzz and even a feud between the director Spike Lee and Chance the Rapper who is from Chicago and criticized Spike in a series of Tweets. The title “Chi-Raq” is an attempt by the filmmakers to link Chicago and Iraq, and how the death rate in Chicago and America are higher compared to US soldiers in Iraq. America now loses 89 people a day to gun violence. The controversy centers around Chicagoans saying Spike Lee is “not from Chicago” and doesn’t know what it is like to live there, and is not qualified to speak out on what the cause of the violence in Chicago might be. Watch a MUST-SEE interview of Spike Lee on MSNBC below. Watch the Trailer for Chi-Raq HERE.  (photo: Aubrey Beardsley/CC)

Watch a great interview of Spike Lee by Chris Hayes of MSNBC below responding to his critics below.