Tag: I Love You All the Time 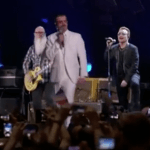 DEC 8, 2015 – U2 played a Paris, France show yesterday and brought the band EoDM onstage with them at the end of the show for a show of unity and support, and to let EoDM play a song. Bono told the crowd, “They were robbed of their stage three weeks ago, and we would […]