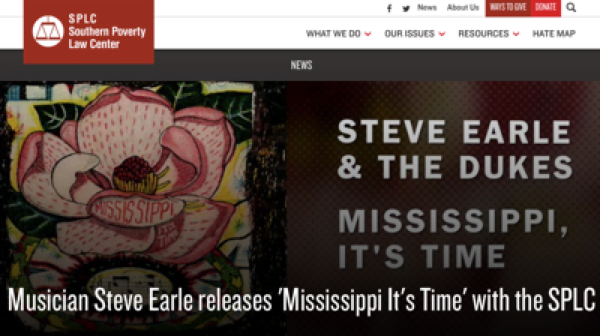 SEP 10, 2015 – Musical-Activist Steve Earle with his band “the Dukes” has released a powerful and great song called “Mississippi It’s Time” with the Southern Poverty Law Center calling for the south to “look away” from the Confederate Battle Flag and for Mississippi to remove that emblem from their state flag. In their powerful video, they don’t hold back and lay into to painful past of the South and show how many states have already removed that ugly emblem from their state flags and Mississippi needs to do so also.

On the SPLC website Steve Earle says, “I grew up in the South and lived there until I was 50 and I know that I’m not the only Southerner who never believed for one second that the Confederate battle flag is symbolic of anything but racism in anything like a modern context. This is about giving those Southerners a voice.” SPLC Founder Morris Dees also said, “This potent and divisive symbol of white supremacy has no place on the official state flag of Mississippi or in any other public spaces.”  The song will go on sale tomorrow on iTunes and all proceeds will go to the Southern Poverty Law Center, and available NOW streaming thanks to SPLC! Hear the great song “Mississippi It’s Time” and watch the powerful music video from Steve Earle and the SPLC below.