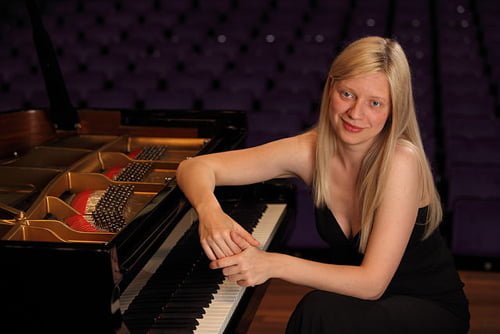 SEP 2, 2015 – Kiev-born Russian pianist Valentina Lisitsa has been removed from the inflight entertainment of both Lufthansa and KLM airlines by pressure from pro-Kiev activists for her pro-Russian and Pro-Putin stances and statements. Valentina has shown strong support for the invasion and annexation of Crimea, and even brought a Russian-backed militant on stage with her. (pictured right) Ukrainians flying on Lufthansa and KLM airlines were offended when they heard her music inflight and wrote, called and emailed the companies, and put enough pressure that both airlines pulled her tracks from their inflight entertainment. Watch a YouTube video below from RT as Valentina has Russian-backed militants and Russian nationals, including Russian veterans posing with 46 medals on their chests, stand in front of her stage at a recent concert in Donetsk. She turns a musical concert into a militant rally. (photo credit: Michael von Aichberger)