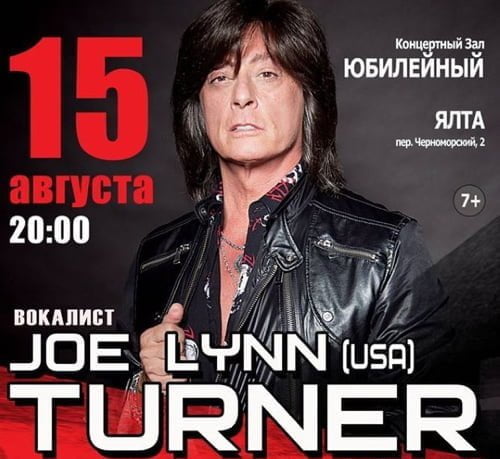 SEP 1, 2015 – Rock vocalist Joe Lynn Turner, who has sang for bands in their later years such as Rainbow and Deep Purple after the main vocalist had left, spoke out in a press conference recently praising the dictator Vladimir Putin and even said, “I have no love anymore for the United States”. Joe Lynn Turner, who was born in Hackensack, New Jersey, is threatening to apply for citizenship and move to a Moscow home or even Belarus, the home of Belarusian Dictator Alyaksandr Lukashenka. Have fun living under a dictatorship Joe, don’t let the US Constitution hit your ass on the way out.

Joe Lynn Turner is currently touring in Crimea with some backup band and singing Rainbow and Deep Purple songs (which he didn’t write or make famous), and at a press conference Turner said, “I’ve listened to every leader in the world, the only one telling the truth is Putin. Truth be told, I have no love anymore for the United States. I don’t like the administrations, I don’t like what’s going on, I don’t like the lies to people. I don’t like anything. It’s not my father’s country, when there was opportunity, when there was truth. So I think there’s a very good question for me personally, because, as I have said already, there’s a house being built in Belarus and perhaps an apartment in Moscow. I’m thinking about it. I have some very, very important friends there who I love very much, and I think I have found a new life and a new home. And that is ‘pravda’, that is the truth.”  (photo credit: Micke Mejden/CC)

Read more on Radio Free Europe Radio Liberty and Blabbermouth.net has a good piece up about it as well as 6 videos from Joe Lynn Turner performing in Crimea.