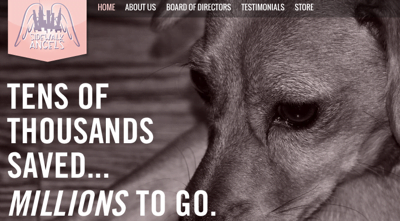 AUG 25, 2015 – Musician Rob Thomas has released a new album “The Great Unknown” and has been making the round promoting it, and he is also taking the time to mention his 12-year-old organization called Sidewalk Angels that is an advocacy organization for stray or “rescue” animals. His wife Marisol is co-founder and president of Sidewalk Angels, and the organization does more than just help our four-legged little friends. Their website says Sidewalk Angels “is a not-for-profit organization dedicated to providing critically needed funds and support to grassroots groups across the country that work diligently in animal rescue and advocacy. It is the primary supporter and sponsor of a number of no-kill animal shelters and animal rescues across the country. Helping to fight for the rights and fair treatment of those with no voice. Additionally, the foundation also supports a myriad of other causes, from childhood health and wellness to the fight against homelessness.” Their mission statement is “The world can move so fast that those in need are often passed by. From animals that have been abandoned and abused to those who are destitute, homeless, or cannot afford proper medical care – these are universal problems that Sidewalk Angels Foundation, through its efforts, encourages people to address locally.”