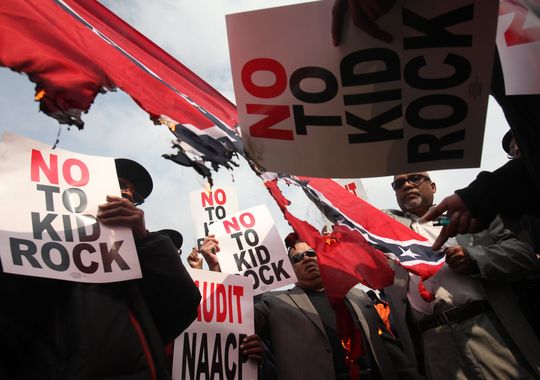 Musician Tries to Defend His Use of Symbol of Hatred 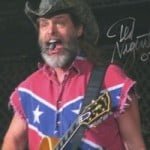 July 12, 2015 – White trash “musician” (and I use that term loosely) Ted Nugent has been attacked recently and rightly so for his use of the Confederate battle flag used on his albums, videos and stage performances. The has-been “rocker” was on the NRA Radio show spewing his mind farts and calling the removal of the Confederate battle flag from the grounds of the South Carolina state capitol “bullshit”, and even went so far as to say, “I’m beginning to wonder if it would have been best had the South won the Civil War.” Watch the NRA News clip segment and read more on Media Matters here.

Detroit-born rapper Kid Rock, who was born about as far away as from the South as you can, embraced the Confederate battle flag about 10-15 years ago, and has absolutely NO “Southern heritage” or lineage to speak of came under fire for his past use of the flag. Kid Rock was reported to have said to people telling him to stop using the flag to “kiss my ass”. Kid Rock stopped using the flag in 2011, so the protest is senseless and Kid Rock should have expressed himself more clearly. Watch a clip of Megan Kelly and Teabagger Dana Loesch in their alternate bubble of reality on Fixed Noise defend the Confederate battle flag use and how the flag “didn’t kill any blacks in Chicago this weekend”; the bone reactionaries won’t let go of.  Watch the clip from hwagner247 from YouTube HERE.  Read a good piece up about the country music genre really not speaking out on this subject, and the few that are defend the Confederate battle flag like Charlie Daniels saying the flag is…wait for it…wait for it…” a sign of pride”. Read the piece by Kristin M. Hall on WinnipegFreePress.com HERE. (Photo: KATHLEEN GALLIGAN, Detroit Free Press)