Calling All Crows Brings Fans and Musicians Together in Activism 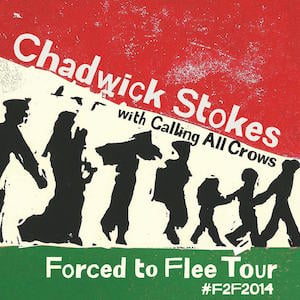 MAR 3, 2015 – Activist-musician Chadwick Stokes grew up listening to ’60s antiwar protest music on vinyl, and they became his heroes and shaped not only his music but also who he is as a person. In 2008 Stokes, together with your manager Sybil Gallagher, took their hunger for activism and formed the non-profit Calling All Crows bringing together fans and musicians in activism to have a “positive impact on the world”. One of their main issues they focused on at first was women’s rights, but they expanded into so many issues, and they do their work locally and globally. They have currently launched their second “Forced to Flee” tour to raise awareness on the plight of refugees, such as those in Syria fleeing the guns and bombs. Watch one of the best music videos I have seen in a while, “Our Lives Our Time”, from Chadwick Stokes below. To find out more about them and their cool work check out the Calling All Crows website here.