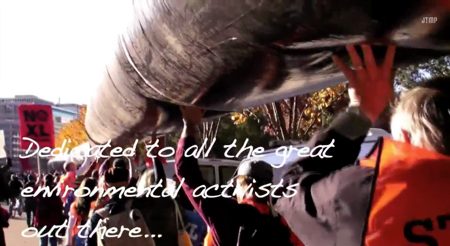 FEB 25, 2015 – President Obama vetoed the construction of the Keystone XL pipeline, an issue that JTMP fought against since the beginning. JTMP sponsored an anti-Keystone Pipeline event in front of the White House back in November of 2011, and activist-musician Troy Lush sang his song, “Now is the Time”, and the video is below.

Then, in April of 2013, the Keystone Kops recorded “Paradise Keystone Pipeline”, covering John Prine’s classic song “Paradise” that spoke out against environmental damage caused by strip mining. The Keystone Kops also started a Change.org petition to ask President Obama to VETO the Keystone XL Pipeline construction, and followed that up with a cool music video, which is below. JTMP thanks all of our supporters for helping us fight on this issue, and let’s briefly celebrate, and then on to stopping Fracking and enacting medical cannabis nationwide!