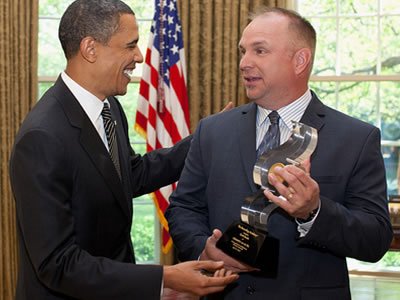 DEC 31, 2014 – Country music legend and all-around cool guy Garth Brooks is enjoying his second wind of his career and life, having fun barnstorming America playing concerts and TV shows. A video of him in concert comforting a cancer patient went viral, and now another video of him is sure to go viral. Garth has released his new single “Mom”, co-written by Don Sampson and Wynn Varble, from his new “Man and Machine” album. “Mom” talks about new life, teaching positive values and making a better world for children to come. When I hear the song I think about the Native American teaching that tells you to care for Mother Earth to assure its safety for the seventh generation to come. Watch Garth perform his new single “Mom” on Good Morning America below from DannyWho!’s YouTube Channel, fast forward to the 2:30 mark for his performance. (photo of Obama and Brooks from 2010 swapping Grammys – credit: Peter Souza/White House – Public Domain)