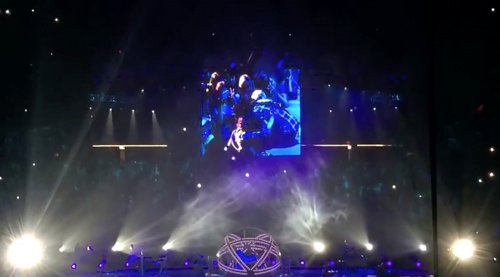 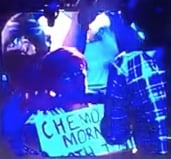 NOV 11, 2014 – One of the most down-to-earth entertainers out there, Garth Brooks, is in a viral video by a fan that has generated 2 1/2 million views in just 3 days. During a recent concert in Minneapolis,  a fan  named Jackson Purdie caught on camera a very extraordinary event. Another fan, Teresa Shaw, who is fighting cancer had a sign that read, “Chemo this morning, Garth tonight, Enjoy the Dance!”. When he started playing “The Dance”, she asked the usher if she could move down close to the stage where Garth could read it and the usher said yes. She moved down to the stage and held up her sign and what happened next was amazing. Garth notices the sign,  sits down on the edge of the stage next to her, and sings the second chorus to her, and even hugs and talks to her. Then he hands her his guitar and takes the sign from her and tells the crowd “If God would just get a big old hand that comes out of the sky and write ‘I exist!’ then there would never be any doubt, right? Well, I want to tell you God just stuck his big hand out!”, and holds up the sign for the crowd to see, and the place erupted into massive cheering. He then tells the fan to “Go kick cancer’s ass!”  Garth has lost two family members to cancer, so he knows what battling the disease is all about. Afterwards he told reporters in a USA Today video, “We can think we’re working…but she is going to chemo in the morning and then a concert that night, nothing’s hard after that. It puts it all in perspective.”

Garth is currently on tour with his wife Trisha Yearwood and family. He is one of the most humble and down-to-earth musicians in my opinion, and he even offers his entire musical catalog, and his new album, for just a $30 digital download. Garth is the man. Watch the awesome video by Jackson Purdie below.