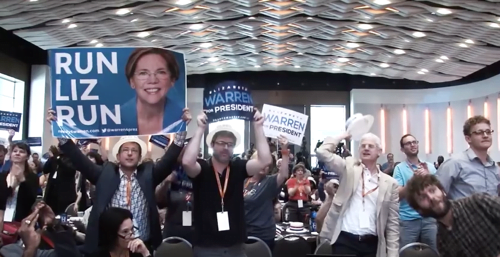 DEC 29, 2014 – A Super PAC called “Stand With Hillary” has released a music video urging Mrs. Clinton to “Stand Up” and run for President in 2016, which features a country band singing lines such as “She’s a mother”, “hard working”, and “she fights for country”. The theme of the song seems to want to get men to think about the women in their life, such as their wife who usually runs the household and checkbook, and hopefully make them think that maybe a woman can run the country as well as they run families and households. In my opinion the song is like the typical generic, vanilla “country” songs that are being played on the FM country radio stations right now, written in 2 hours and horribly banal. Personally, I agree. I think a woman should run for President: Senator Elizabeth Warren.