War Against Whaling Rages On… 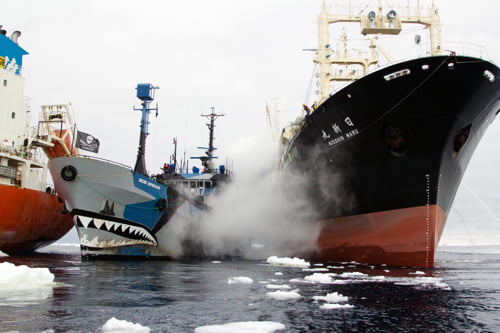 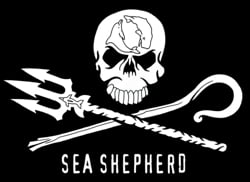 JAN 2, 2015 – The war against commercial whaling that has been going on for decades, continues on in 3 TV episodes in Discovery Communication’s “Whale Wars” on the Animal Planet channel tonight at 8 PM EST. No other Whale Wars episodes are scheduled for next Friday, and the show’s future is uncertain and may be dropped by Discovery Communications chicken shits. Check your local listings for channel number and time. The non-profit organization Sea Shepherd is featured on the show and unfortunately has had their leader, Captain Paul Watson, grounded due to a court injunction, and has also recently lost a court ruling and must pay damages to the Japanese commercial whaling fleet. Whale War’s future is murky, and in my research I found they are “burning off” 3 episodes tonight, and there are NO future episodes next Friday. I predict Discovery Communications will drop the show in an announcement later this month. Discovery has all the advertising time sold so they don’t want to tip their hand and have people not tune in tonight. But if you read their very carefully worded and tortured press release they come out supportive of the show, but you can read between the lines and see they left an out for them to axe the show in the very near future. In fact, Discovery and Animal Planet are not even pushing Whale Wars and I can find no advertising or even a mention of the 7th season on the Whale War’s Animal Planet page, just a mention of the 3 episodes tonight. I have not seen one single commercial on any of the Discovery Communications channels advertising the 7th season. I accidentally stumbled upon it by looking ahead in my DVR schedule, for last year I had set the DVR to record all new episodes. Otherwise, I would have never known the supposed 7th season was starting. The only mention of it that I can find is on Captain Paul Watson’s Facebook Page. Discovery Communications is out to make a profit, NOT save the whales. Their true colors are shown. JTMP calls on anti-whaling activists to tell Discovery Communications “Don’t drop Whale Wars!”, and if they do drop Whale Wars, we call on the public to boycott Discovery Communications, Animal Planet, and ALL of the other channels that Discovery owns.

Regardless of losing a few battles, anti-whaling activists and Sea Shepherd vow to press on with the war and to make the killing of whales for commercial purposes something you only read about in Moby Dick. In fact, the International Court of Justice has ruled against the Japanese whaling fleet and must stop their whale slaughter for the time being anyways. The Japanese whaling fleet and government have continually lied over the years and said they were killing the whales “for scientific purposes”, when in fact the fleet was harvesting the whale meat for consumption by the Japanese public. The Japanese government even used Fukushima disaster relief funds to subsidize the fleet to kill whales and feed the public whale meat. JTMP urges our supporters to not only please donate to JTMP, but please consider helping Sea Shepherd and join the war against whaling! Watch one of my favorite groups growing up, Yes, perform their anti-whaling song, “Don’t Kill the Whale” from YesOfficial’s YouTube Channel below.