Is Bono Selling Out to Monsanto? | Justice Through Music 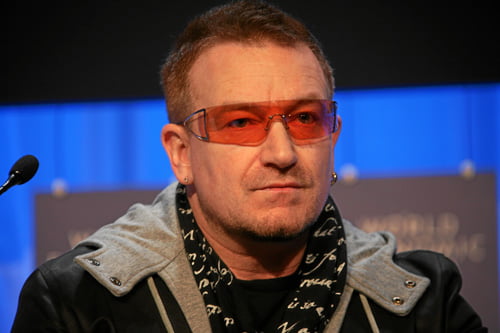 Activist-Singer Attacked for Association with Monsanto at G7 Summit

DEC 4, 2014 – Bono, the lead singer and activist-musician from U2, came under fire from his fans and others for being associated with Monsanto and private companies “partnering” with the private sector to solve Africa’s hunger crisis at the last G8 Summit meeting back in 2013 and  even the recent G7 Summit meeting (Putin got kicked out) in Belgium, even being labeled a “spokesperson for Monsanto” and a “sellout” by many by speaking favorably of Monsanto’s and other chemical agribusinesses efforts to create GMO Frankenfood. Critics of course are seriously worried about Monsanto and the other billion-dollar chemical agribusinesses, and what the might do to our food supply, the seeds, and the soil. Monsanto and others at the G8 and G7 Summit meetings talk about billion-dollar agribusinesses “partnering” (collaborating?) with the private sector securing land in Africa through the various governments, all in the name of philanthropy and “feeding the hungry” of course. Not. The chemical agribusinesses want to of course get cheap land, make profits, and use Africa as an experimental ground for their GMO Frankencorn to try and corner the market on seeds. All the while Monsanto’s scientists are in the lab constantly gene-splicing and creating new Frankenfoods and “fertilizers” to poison and ruin the soil, perhaps irreversibly.

Monsanto issued a press release with corporate propaganda saying, “The company’s support of the New Vision for Agriculture Initiative, the Grow Africa Partnership and the G8’s New Alliance for Food Security and Nutrition through a $50 million commitment over the next ten years to support sustained Africa agricultural development and growth.” TRANSLATION: We are not donating money, we are investing into a business venture that will mostly benefit us and the .01%. The “New Alliance for Food Security and Nutrition” sounds frickin’ scary to a lot of people too.

The propaganda went on to spew, “Monsanto will seek increased collaboration among farmers, private industry, governments and civil society groups that can fuel the development of innovations to increase productivity…” The “innovation” word scares me, because I feel Monsanto will do anything to “increase productivity” (READ: PROFIT) and may take us all down with them. The “innovation” they speak of is scientists in labs messing with the laws of nature and never asking “Should we?” they just ask “Can we?”  as they manipulate genes and create their Frankenfood. “It’s alive!” 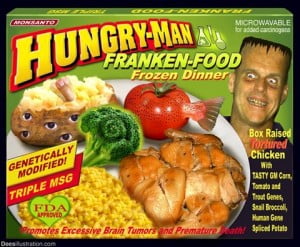 Bono isn’t Monsanto’s “spokesperson” of course, but he is trying too much in my opinion in trying to be inclusive and include Monsanto and the .01% in “saving the world” and endorses them and their methods implicitly in his words. It is noble of him to do that, but I am sorry Bono. How do you compromise with people who want to ruin the Earth? We let them ruin only half the Earth? No, Monsanto’s ways are against nature and we will not allow them or any other chemical-agribusiness to ruin our food system and planet with their GMO Frankenfood. What part of NO GMO do you not understand Bono?

What do you think? Is Bono selling out? There is the fact that millions of hungry people will be fed by these agribusinesses, but at what cost? Let us know what you think on our JTMP Facebook Page:

'Is Bono Selling Out to Monsanto?' have 3 comments