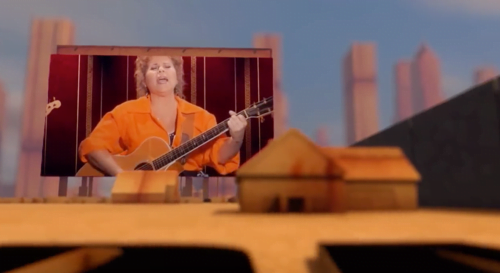 Activist-Musician Calls for End of Cannabis Prohibition and “Drug War”

DEC 8, 2014 – With the Federal government and the FDA in cahoots with the billion-dollar chemical death pill industry, and thousands of overdose deaths a year from these death pills, yet no pharmaceutical company offices are raided and no one arrested, activist-musician Ellen Bukstel decided to write a song and call out the hypocrisy of our Federal government as they help peddle these drug death pills while locking up poor citizens for small amounts of cannabis. She sings about the stupid “Dug War” and the devastating effect it has on the poor; it is not an attack to get rid of poverty, it is an actual “War on People of Poverty”, incarcerating them in for-profit private prisons instead of treating it like a health issue. Ellen calls for the Federal government to remove cannabis from the Schedule 1 Category of controlled substances, and for states and the Federal government to do just like we did with alcohol…remove the Prohibition on cannabis. Americans should have the freedom and liberty to decide individually if they do or do not want to use it medicinally or recreationally, NOT the government. Soldiers have died for our freedoms, let us use them please. Quit the death pills, contact your State and Federal representatives, and tell them you want to switch to 100% natural medical cannabis. Tell them it is impossible to “overdose” on cannabis, and there are ZERO reported overdose deaths from cannabis. Yet, thousands die every year from overdosing on “Percocets”, “Oxycodone” and other death pills all sanctioned and “okayed” by our Federal government. Ask them, “Who’s the Pusher now??!!” Watch Ellen sing her cool song “Who’s the Pusher now?” below.  (photo credit: ellenbukstel.com)