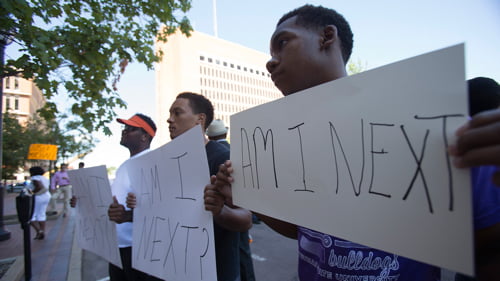 AUG 22, 2014 – JTMP has released a video hoping to spark a discussion and motivation for the people in Ferguson to talk about registering to vote, getting informed on who your leaders are, voting, and getting involved. We as America also need to make sure we are not making it harder for these citizens to vote, let’s make it easier for them to vote. The song in the video is a SoundCloud release by Lauryn Hill called “Black Rage (Sketch)” and moved me so much I set it to a pictures (Warning: Graphic Photos). Maybe if we show the ugliness of the past, we can understand the anger and rage of the present. JTMP calls for peace and justice, and for the young people in Ferguson to not give up hope. Please care about your community, get involved, register to vote, and vote those sons of bitches like Governor Nixon and Mayor James Knowles out of office! Scroll down on the right side, and you can register to vote right here on JTMP! Even from your Mobile Device!!