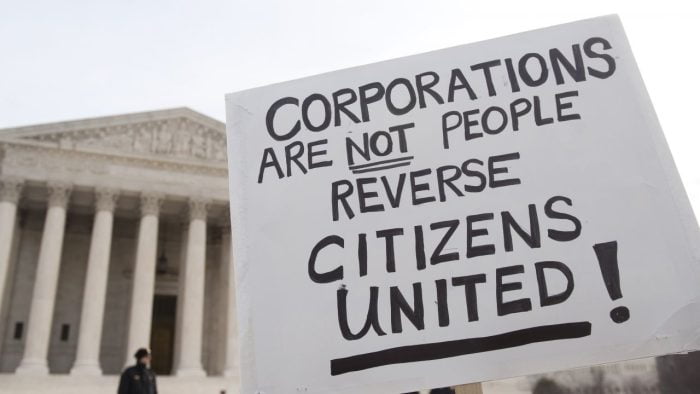 So, Admin Schiff and the boys downtown decided to introduce some actual good legislation to show the Red Coats that we can actually propose good stuff getting done. Citizens United needs to go. Will it though? Well, if you were having your money tree cut down because of some democrat, what would you, the extremist right winger who depends on that money tree, do? Yeah, I thought so…

A group of House Democrats introduced a constitutional amendment on Thursday to overturn a Supreme Court ruling that eliminated restrictions on corporate campaign spending.

The Supreme Court’s 2010 ruling in the Citizens United v. FEC case prohibited the government from restricting political campaign spending by companies, nonprofit organizations and unions. This amendment, if passed, would allow Congress and state governments to enact “reasonable, viewpoint-neutral” limitations on campaign funding, including restricting corporations from spending “unlimited amounts of money to influence elections.”

Rep. Adam Schiff (D-Calif.), who introduced the amendment, said in a press release that it would “close legal loopholes” that corporations and other wealthy groups have “exploited for far too long.” Schiff has introduced an amendment to overturn the Citizens United ruling every year since 2013, according to the release.

“The flow of unrestricted corporate and dark money into our elections has dangerously eroded the American people’s faith in our democracy, and in our government’s ability to deliver for them and their families,” Schiff said in the statement.

“Citizens United was one of the most egregious enablers of special interest money, but it was only the latest in a long line of Supreme Court cases that opened the floodgates. To truly rein in dark money, we must amend our Constitution,” he added.

The amendment, which was also introduced by Reps. Dean Phillips (D-Minn.), Pramila Jayapal (D-Wash.) and Jim McGovern (D-Mass.), would also allow states to set up public campaign financing systems that could restrict the influence of private wealth.

“We’ve introduced a constitutional amendment to overturn Citizens United and the irresponsible SCOTUS decisions that came before it,” Schiff said in a tweet announcing the amendment Thursday. “Unrestricted dark money has no place in our elections or democracy. We need to return power to people. Once and for all.”

The 2022 midterm election cycle was the most expensive in history, with outside donors spending more than $2 billion on federal midterm candidates, according to Open Secrets, a nonprofit organization that tracks money in politics.