Lauren Boebert and MTG Go to War Against Each Other 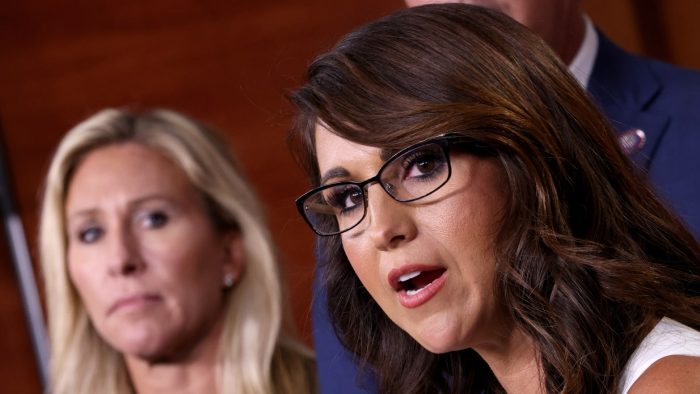 MAGA continues to decline and eat their own on the way out.

The increasingly hostile MAGA-world battle over whether to back Rep. Kevin McCarthy (R-CA) for speaker of the House has claimed another set of victims.

The increasingly hostile MAGA-world battle over whether or not to back Rep. Kevin McCarthy (R-CA) for Speaker of the House has led to a falling out between onetime BFFs Rep. Lauren Boebert (R-CO) and Rep. Marjorie Taylor Greene (R-GA).

At Turning Point USA’s winter student conference on Monday, Boebert said that her support for McCarthy isn’t as firm as Greene’s—before ripping into the Georgia Republican over her belief in “Jewish space lasers.” But Greene wasn’t about to let Boebert get the last word, with the 48-year-old firing back at her younger colleague on Monday evening with a trio of tweets accusing Boebert of partaking in “high school drama.”

For a pair of b0som buddies that once enjoyed such wholesome activities as heckling President Joe Biden together during his first State of the Union address, Greene and Boebert have taken pains to publicly emphasize the fissure in their relationship in recent months.

In April, Politico reported that the duo had locked horns over a February appearance by Greene at a conference organized by white nationalist Nick Fuentes. The confrontation became so heated that another lawmaker had to step in, seemingly before blows could be exchanged. Republican lawmakers told the outlet that, privately, Boebert “detests” being associated with Greene, seen in Capitol circles as more of a maverick.