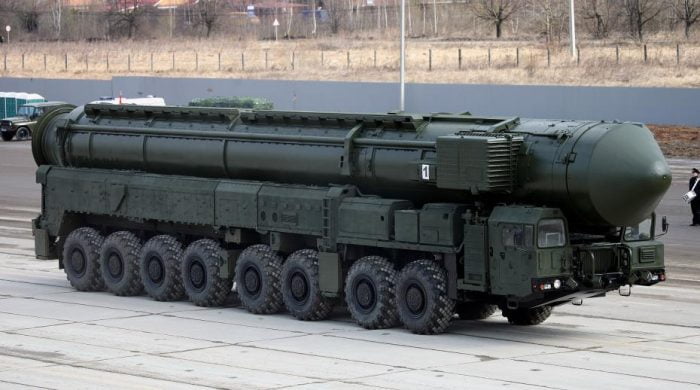 Here we go again, Vladimir Putin is plowing ahead with more threats to launch nuclear weapons at the West if it doesn’t stop helping Ukraine. This is like the tenth time that Putin has threatened the world with nuclear weapons, and each time it’s seen for what it is, a huge bluff. As I’ve said many times, you can only use the bluff card once. If you don’t launch after that, no one will believe you any more.

Of course this story isn’t covered by any mainstream news site. Instead it’s put out in the only media avenue that Putin has left, the tabloids. Yes that’s right folks, the “boy stuck in refrigerator eats own foot” media. The “Aliens have landed and have taken over” media. The “mysterious sightings on Mars” media. The tabloids are of course the media you read while you stand in the check out line at the grocery store. That friends and neighbors is all Putin has left to spread his bluff card of nuclear annihilation to the world.

Of course Drudge, who amplifies this media from time to time for clickbait, is all over it as a major headline.

You’d think we have weapons that would be at least 100 times more powerful these days. Alas, no, we only have moved up the chain in power by a factor of 12 since World War 2. So, in fact, Russia doesn’t really have much in the way of powerful weapons on the nuclear side because 12 times more isn’t that much. Why not say 20 times, or 50 times? Now that might make people stand up and go hrmm… But 12, naa, that’s a bunker buster bomb. Yes it does damage, but not as much as 50 or 100 times more powerful. 12 is like saying: I got this firecracker and it goes boom, it’s better than last years firecrackers, but only by about 10 percent.

VLADIMIR Putin has renewed his nuke threat against the West by appearing to ready a nuclear missile for launch.

Footage shows a huge Russian Yars rocket able to hit the UK and the US being loaded into a silo at a base near Moscow.

The intercontinental ballistic missile has a 7,500 mile range and when nuclear-armed is reportedly 12 times more destructive than the atomic bomb dropped on Hiroshima.

It was seen in Russian propaganda being installed in a launch-pad using a special transport and loading unit – but there is no indication of any order for an imminent launch.

Putin was seen in late October overseeing the launch of a similar Yars nuclear missile on a mock attack on the West amid high tension in the war with Ukraine.

In the drills, Russia reportedly practised its response to a Western nuclear attack and were aimed at targeting the UK and US.

Fears are have been raised that the 70-year-old tyrant could detonate a nuke as his forces face mounting loses in the disastrous Ukraine war.

Russia is building up to more nuclear showboating as it marks the annual Strategic Missile Forces Day on 17 December.

Missile force commander Colonel Alexei Sokolov made clear the latest exercise was aimed at sending a message to the West, with both the UK and US within range.

“The importance of this operation lies in the fact that the missile will be put on combat duty on schedule,” he said.

“The homeland will get another nuclear missile weapon, which will make it possible to solve any tasks at the strategic level.”

Combat engineer Vadim Vyazovsky told TV Zvezda, the Russian defence ministry’s own channel: “I feel proud of Russia that my country is putting such products into service so that the Motherland can sleep well.”

The Kozelsk missile base is currently undergoing modernisation and a revamp, said reports.

The Yars is a modification of the Topol-M missile system, and was first deployed in 2009.

Video released during October’s drills showed armed forces personnel in front of computers launching a one of the missiles.

Other footage showed a Sineva intercontinental ballistic missile being fired from a submarine in the Barents Sea and a TU-95 bomber that launched cruise missiles.

The Kremlin said that all tasks set for the exercise were fulfilled and all the missiles that were test-fired reached their designated targets.