It’s Friday: Another Day, Another Threat of Nuclear Annihilation 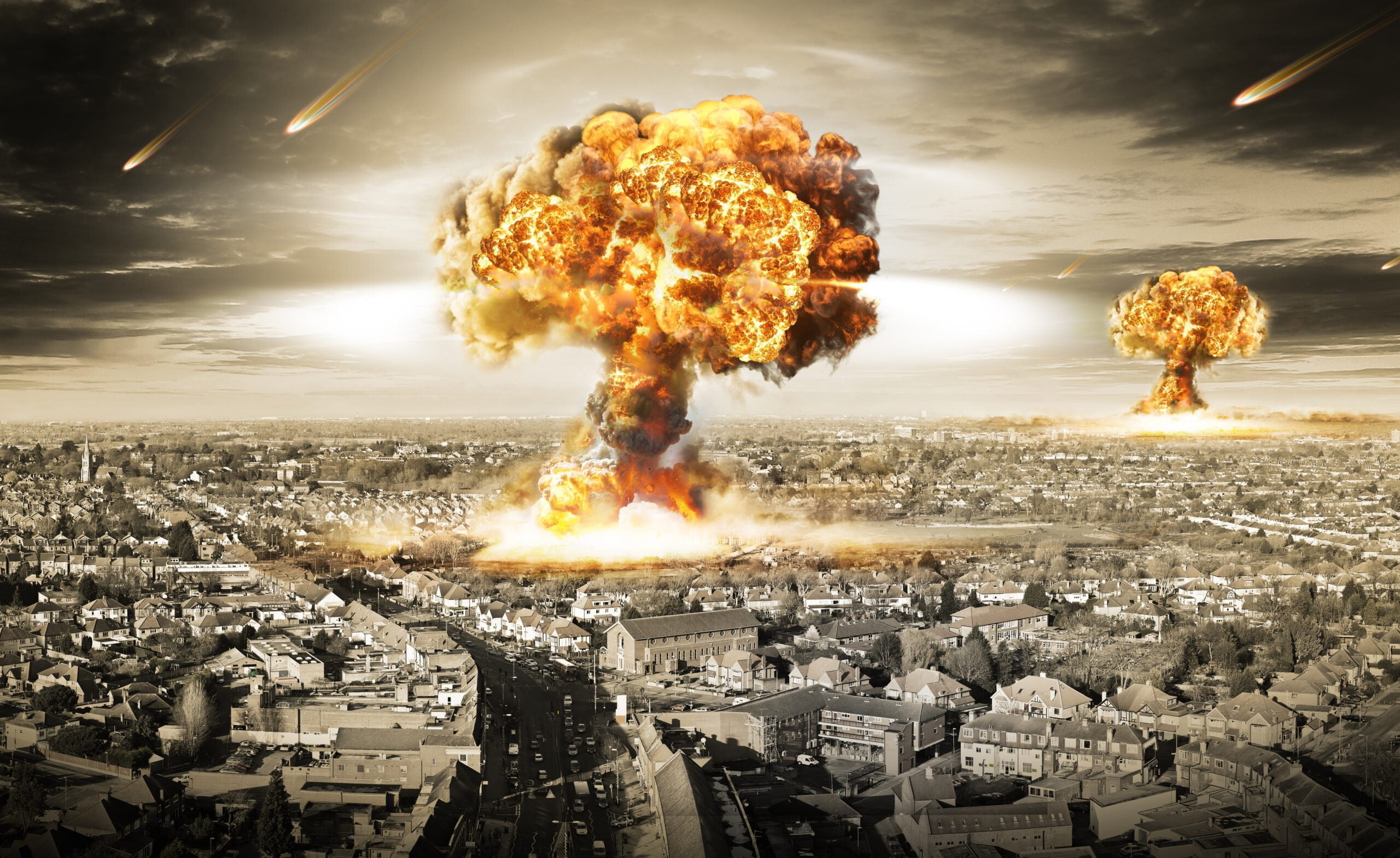 It’s that time of the week, and just like any other Friday we need to end the week with another threat of being annihilated by some sort of nuclear catastrophe. This time in Ukraine, where the Russians are playing a game of accuse the accusers, accusing Ukraine of using a nuclear reactor as a false flag operation to blame Russia for a nuclear meltdown. Of course it would be Russias fault, after all they are the attacking force while Ukraine is trying to defend their homeland from Russian invaders. But I digress.

It stands to reason that Russia has been using more and more threats of using nuclear weapons to settle the conflict. But they can’t be seen as using them first, so what to do? Well how about staging forces at a nuclear plant and using it as staging ground for missile attacks and other destructive weapons? Then when shit hits the fan they can blame Ukraine for attacking (defending) their nuclear plant. Then when a major meltdown occurs the Russians can blame the Ukrainians for the meltdown.

Of course if that happens there won’t be anything really left of most of Europe. And of course both sides will blame the other using the standard accuse the accusers nonsense to deflect blame for it. But by the time that all gets sorted out no one will really know who was to blame, and of course the death toll will be massive. Right wing fear media has been covering it as the next big thing.

Headlines that are meant to scare you with dubious sourcing are what right wingers will feed into as another attack on the Biden administration. I am sure that these plots are being coordinated with Russian assets in the United States Congress and other right wing media. It’s as if they want it to happen so they can pile on more for a return of Trump, who will stand back and claim only he can fix it.

Most of this is centered on Russian plans to scare people in the west to stop supporting Ukraine with weapons and advisors and so forth. But here is the thing, Putin has been using this tactic one too many times. You know what they say, you use it once, and only for effect, if it fails, you fold or you step it up and do it. This is like the 10th time we’ve heard this news about some nuclear armageddon that Putin will unleash if the west wont stop supporting Ukraine, which by the way is kicking Russian asses to hell and back. And of course these threats have now gone into the meh category of: hey we’re all going to die, oh really, hey did you know there is a sale at Penny’s?

That’s right, no one really gives a fuck about them. Besides it’ll only affect those “over there” not us. But in this interconnected world it will in fact affect everyone globally. Think food, that one thing everyone is complaining about today. Well, if something like this happens food will be in even shorter supply. And prices, yeah, you haven’t seen nothing yet if that type of incident happens. Better stock up on jars of Strawberries, because they will in fact jump to 150.00 dollars a jar as they did in Solyent Green.

But does anyone really care about these threats anymore? It’s really hard to say, because the more you fail to follow through on your threats, the less people will believe you as time goes on. Eventually it just becomes a meh thing, or a I don’t care moment for most. So Putin is losing his edge, and even though he wants to send a strong message to the west, he can’t quite wrap his head around it, so he needs some sort of provocation moment where he can make something like that happen, but then be able to blame someone else for it and throw up his hands and say, hey, I warned you.

Russian President Vladimir Putin has agreed that a team of independent inspectors can travel to the Moscow-occupied Zaporizhzhia nuclear plant via Ukraine, the French presidency said on Friday.

The apparent resolution of a dispute over whether inspectors travel to the plant via Ukraine or Russia came as a senior US defence official said Ukraine’s forces had brought the Russian advance to a halt.

“You are seeing a complete and total lack of progress by the Russians on the battlefield,” the official said, speaking to reporters on grounds of anonymity.

According to French President Emmanuel Macron’s office, Putin had “reconsidered the demand” that the International Atomic Energy Agency travel through Russia to the site, after the Russian leader himself warned fighting there could bring about a “catastrophe”.

It specified that Putin had dropped his demand that the IAEA team travel to the site via Russia, saying it could arrive via Ukraine.

Meanwhile, UN chief Antonio Guterres urged Moscow’s forces occupying the Zaporizhzhia plant in south Ukraine not to disconnect the facility from the grid and potentially cut supplies to millions of Ukrainians.

A flare-up in fighting around the Russian-controlled nuclear power station — with both sides blaming each other for attacks — has raised the spectre of a disaster worse than in Chernobyl.

The Kremlin said in a statement earlier that Putin and Macron agreed that officials from the UN’s nuclear watchdog should carry out inspections “as soon as possible” to “assess the real situation on the ground”.

Putin also “stressed that the systematic shelling by the Ukrainian military of the territory of the Zaporizhzhia nuclear power plant creates the danger of a large-scale catastrophe”, the Kremlin added.

The warning came just a day after Turkish leader Recep Tayyip Erdogan and Guterres, meeting in the east Ukrainian city of Lviv, sounded the alarm over the intensified fighting, and Ukrainian President Volodymyr Zelensky urged the United Nations to secure the site.

The Turkish leader said: “We are worried. We do not want another Chernobyl,” referring to the 1986 nuclear disaster, while Guterres cautioned that any damage to the plant would be akin to “suicide”.

During his visit to the southern port of Odessa on Friday, the UN secretary general said: “Obviously, the electricity from Zaporizhzhia is Ukrainian electricity. This principle must be fully respected”.

“Naturally, its energy must be used by the Ukrainian people,” he told AFP in separate comments.

His remarks came after Ukrainian energy operator Energoatom alleged that Russian troops were planning to “shut off the reactors” at Zaporizhzhia, which is capable of supplying four million homes.

On Thursday, Moscow said Kyiv was preparing a “provocation” at the site that would see Russia “accused of creating a man-made disaster at the plant”.

Kyiv, however, insisted that Moscow was planning the provocation, and said Russia’s occupying forces had ordered most staff to stay home Friday and drawn down officials from Russia’s own state nuclear agency.

The UN chief was visiting Odessa as part of an appeal to make Ukrainian grain available to poor countries struggling with soaring food prices, after a landmark deal with Russia last month to allow its export.

Earlier, Guterres met Erdogan — who helped broker the grain deal inked in Istanbul — and Zelensky, saying the United Nations hoped to scale up work under the deal ahead of the winter.

The deal, the only significant agreement between Russia and Ukraine since Moscow invaded in February, has so far seen 25 boats carrying some 600,000 tonnes of agricultural products depart from three designated ports, Kyiv has said.

But during the call with Macron — their first in nearly three months — Putin told the French leader that Russia was facing obstacles in the export of its food products and fertiliser.

“There are still obstacles to… Russian exports that do not contribute to the solution of problems related to ensuring global food security,” the Kremlin said.

Guterres is expected to head to Turkey after Odessa to visit the Joint Coordination Centre, the body tasked with overseeing the accord.

The agreement between Kyiv and Moscow to clear exit corridors from three Ukrainian ports, including Odessa, has brought some relief to concerns of global food shortages with the warring countries among the world’s leading producers.

The deal has held, but brought little respite along the sprawling front lines in eastern Ukraine, where Russian forces have edged slowly forward after nearly six months of fighting.

The primary tool of Moscow’s forces has been artillery barrages, and recent bombardments over the eastern Donetsk region — which has been partially controlled by Russian proxies since 2014 — left several dead.

The Ukrainian head of the region, Pavlo Kyrylenko, said on social media Friday that Russian strikes had killed five people and wounded 10 more in three settlements.

Strikes early Friday in Kharkiv, Ukraine’s second largest city, left one person dead and damaged a school and a private business, the head of the region said. Russian strikes around Kharkiv have killed more than a dozen people over the last two days.