The Stench of Corruption Is Growing Stronger Around the Supreme Court 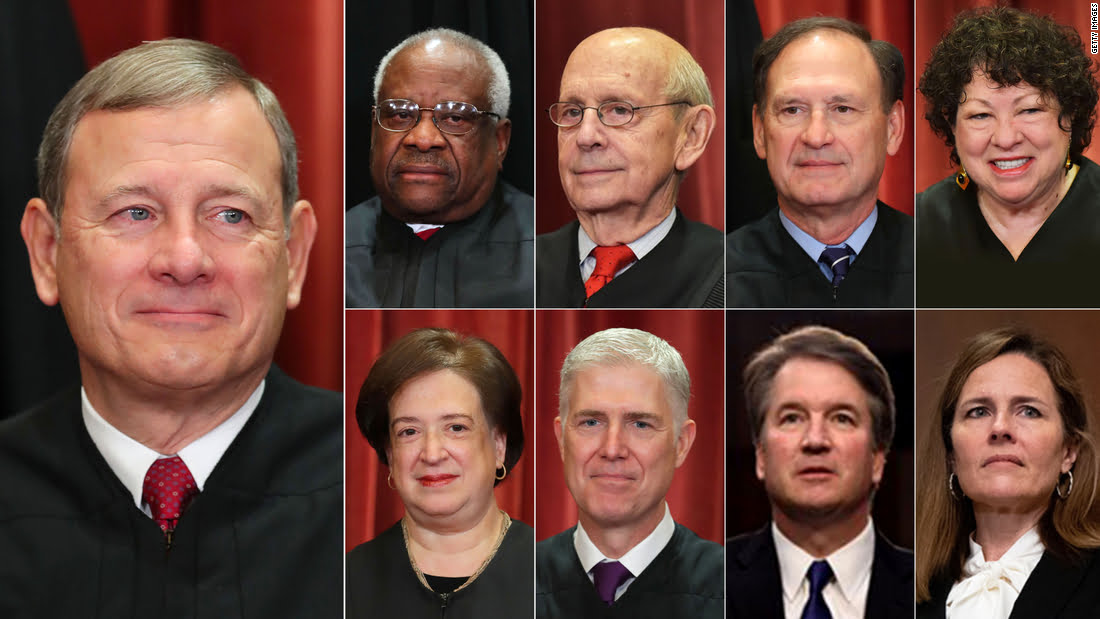 Stench around SCOTUS? Yes sir, we know that in spades. SCOTUS has devolved into a right wing partisan court filled with right wing corruption and two bit hacks.

Chief Justice John Roberts insists the court can police itself, but all evidence points to the contrary.

There will be many legacies of the Roberts court whenever the history of this era is written, assuming history books are still allowed in the America John Roberts leaves behind. There will be the court’s string of anti-labor decisions, its extremist rulings in support of guns and against voting rights, and its rejection of precedents like Roe v. Wade. But one of Roberts’s most problematic contributions to the annals of the Supreme Court will be the trail of apparent corruption and impropriety the associate justices have gotten up to under his watch.

Under Roberts, the idea that the Supreme Court can police itself has been revealed to be an utter farce. From the way Clarence Thomas refuses to recuse himself from cases involving the insurrection his wife seemingly helped to foment to the 83 ethics complaints that were not investigated against alleged attempted rapist Brett Kavanaugh, Roberts has been an absentee landlord. He makes grand pronouncements defending the “legitimacy” of the court without doing anything to protect its legitimacy. He has a whole lot to say anytime a liberal justice suggests that the court is losing its standing in the eyes of the public (an objective fact backed up by polling data) but doesn’t say anything while conservative justices allow Federalist Society and religious-right influencers to turn the Supreme Court into their private frat house.

The latest example of Roberts’s permissiveness in the face of conservative impropriety comes from an explosive story in The New York Times. In the report, published over the weekend, former anti-abortion activist Robert Schenk revealed that Justice Samuel Alito disclosed the outcome of the 2014 case Burwell v. Hobby Lobby to a group of dinner guests months before the opinion was released to the public. Alito denies the allegation, but the Times reviewed contemporaneous e-mails from Schenk that seem to indicate Schenk knew the outcome of the contentious ruling in the 5-4 decision, authored by Alito himself, before the rest of us did.

Many of Schenk’s other allegations have gotten buried under the weight of the Hobby Lobby reveal, because Justice Alito was also the author of the Dobbs decision overturning Roe v. Wade, which leaked weeks before the court’s ruling was made public. Obviously, people concerned about the leak of Dobbs now have another suspect.

After the Dobbs leak, white-wing pundits and publications immediately jumped to the conclusion that a liberal justice, or someone in the liberal camp, was responsible for the leak, with some of the most odious conservatives concocting elaborate, unsupported theories based on their “investigations” of the Linked-In pages of some liberal clerks. The motive, they claimed, was to intimidate the court into following its own precedents and upholding the dignity and equality of women and pregnant people.

The problem with this theory is there was no chance a leak was going to change the mind of a conservative justice, which is why I always suspected it came from one of the conservatives themselves, to strengthen the resolve of any wavering justices to adopt the most thorough repudiation of abortion rights possible (which they did).

This is why Schenk’s other allegations are, to me, the most interesting revelations of all. According to Schenk, he and others like him would regularly seek access to the justices in their personal capacities (Alito allegedly leaked the Hobby Lobby decision over dinner at his own home) and use that access to push their views. He says that Justices Alito and the late Antonin Scalia would give these people their reserved seats in the gallery of the court so they could watch oral arguments. Schenk said his aim was to temper the resolve of the conservative justices so that they would hold fast to their most extreme rulings. He says he knew that they were never going to change a justice’s mind, so their goal was “rather to stiffen the resolve of the court’s conservatives in taking uncompromising stances that could eventually lead to a reversal of Roe.”

This is the heart of how influence can be used to shape the court. You’re not going to convince Alito that women are people; you’re not going to convince Thomas that being loved by white people is a pathetic life goal; you’re not going to convince Neil Gorsuch that the 20th century happened. If you are part of the conservative-industrial complex, you don’t have to convince these people of anything; they’re already on your side. All you have to do is convince the conservative justices to be the worst versions of themselves. All you have to do is keep them in a far-right echo chamber where all they hear is the support of fellow conservatives. And when you think about these justices reserving seats at the court for far-right anti-abortion activists to “watch” the justices preside of abortion-related cases, it sure looks like they appreciated the support of their own cheering section.

Are these influence campaigns partially responsible for the conservative judicial extremism? I can’t say. But I can say that Samuel Alito in particular has been resistant to facts. It was Alito, after all, who mouthed “not true” at President Barack Obama as Obama explained how much dark money the Citizens United decision would unleash on our politics, during the 2010 State of the Union address. (Obama was right, by the way.) Maybe Alito’s inflated sense of self-assuredness-while-wrong would be deflated if he ever had dinner outside of the little bubble of influencers.

Two hours might not sound like much, but I would have paid good money to get that much of Alito’s private time before he decided to send women and pregnant people back to the 1950s. I would have paid good money to get a few hours with Roberts before he sent voting rights back to the 1850s. When you’re dealing with a juristocracy, even a little influence over the unaccountable arbiters of your fate is worth a great deal. It’s the reason communications between jurors and the outside world are severely limited when they are deliberating a case. And it’s the reason most courts have strict rules about whom judges can interact with while a case is in front of their court.

But not the Supreme Court. The Supreme Court operates with no statutory ethics rules and recognizes no authority higher than itself. It is up to each individual justice to decide for themselves whom they can meet with and whom they can talk to while they are deliberating their cases. If these justices want to talk with activists who have a vested interest in cases that are in front of the court, or simply share the outcomes of cases so the activists can jump-start their media campaign in defense of the justices’ rulings, there is no law or rule to stop them.

Absent congressional action to pass a code of ethics for the Supreme Court (and Senator Sheldon Whitehouse and Representative Hank Johnson seem poised to cosponsor such a bill), the only person who could address the appearance of corruption and partisan bias on the court is the chief justice. Roberts could use his power to promulgate a code of conduct for his fellow justices, and strip them of the authority to write opinions if they don’t comply. He could use his largely unfettered access to the media to advocate for statutory rules and punishments.

Instead, he does nothing other than promote the objective falsehood that the judiciary is good at policing itself. Roberts tries to paint a rosy scenario, but the reality is that the court has become an ethical disaster under his watch. It will likely continue to be one, so long as he is in charge.

If liberals want a fair shake in front of this court, I guess the best option would be to marry one of Sam Alito’s friends and try to score an invite to Thanksgiving dinner. That’s where the real decisions are being made. The arguments they conduct on First Street in front of the microphones are just for show.