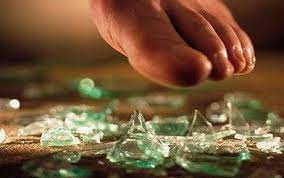 Ron DeSantis thinks that voters will actually walk over broken glass to vote for him. So here is a proposal for voters in Florida. We will set up a walkway towards the polling precinct where voters will be given an opportunity to walk 500 yards over broken glass to get inside the precinct to vote for him. No rewards will be given upon completion, and no aid or comfort or water or bandaids or help from emergency responders will be allowed during the process.

Voters must walk over the broken glass and straight into the polling area blood soaked and in pain, and then stand in long lines inside to get to the voting booth while bleeding profusely from broken glass embedded deep into their feet. Then they must vote for Ron DeSantis and come out and prove it. Afterwards they can leave, and once in the parking lot they may avail themselves of emergency responders. The State of Florida, and Ron DeSantis, will not be allowed to pay for said emergency services either. Voters will be forced to pay for their own medical treatment, and must sign a waiver against any future lawsuits against Florida or Ron DeSantis.

Let’s see how real these voters are. The challenge has been laid, and next time the polls open for a DeSantis run, we will begin work on fundraising for a 500 yard broken glass pit that DeSantis voters will be able to avail themselves of to vote for him. YouTube videos will be made of the event, and it will be carried via live streaming.

Sounding more and more like a future presidential candidate, Florida Gov. Ron DeSantis arrogantly boasted to a group of Republicans that people are willing to “walk barefoot over broken glass” to vote for him because he’s such a superlative leader.

DeSantis — flush from a strong reelection win and midterm victories that swept the state — loudly blew his own horn Saturday night in an appearance before a leadership meeting of the Republican Jewish Coalition in Las Vegas.

He also presented himself and his state as a model for the party — and nation — in what sounded very much like a dry-run of a national campaign speech. “Florida really has a blueprint for success … we’re all about exercising leadership and delivering results for the people that we represent,” he said.

DeSantis touted his “free state of Florida,” and boasted of battling vaccines in a fight against a “Faucian dystopia where people’s freedoms were curtailed and their livelihoods destroyed.”

He also preened that “the state of Florida is where ‘woke’ goes to die,” as he detailed various programs restricting freedoms for the LGBTQ community and sharply narrowing what’s taught in schools.

“When you stand up for what’s right, when you show people you’re willing to fight for them, they will walk over broken glass barefoot to come vote for you, and that’s exactly what they did for me in record numbers,” the Republican governor said to a standing ovation. “We’ve got a lot more to do, and I have only begun to fight.”

DeSantis is widely expected to announce a run for the presidency. Donald Trump, who announced last Tuesday that he’s running, has already repeatedly attacked the governor and come up with a nickname for him — Ron DeSanctimonious — ahead of what he likely imagines would be a vicious rivalry.

The former president also addressed the coalition meeting earlier via a video livestream, which also elicited a standing ovation. He boasted that the GOP is “a much bigger, more powerful party than it was before I got there.”

But former New Jersey Gov. Chris Christie, another expected Republican presidential candidate, called on the GOP at the meeting to dump Trump.

“We keep losing and losing and losing,” Christie added, referring to Republicans’ dismal midterm elections performance. “The fact of the matter is the reason we’re losing is because Donald Trump has put himself before everybody else.”

Christie said Republicans are now faced with a choice between “the party of me,” referring to Trump’s self-involvement, or the “party of us.”

“We don’t want to do bending to the will of one person, rather than advocating for the good of all of our people,” he added.

Sources have indicated that DeSantis will likely bide his time before announcing that he plans to seek the presidency. In the meantime, he’s hoping Trump will “punch himself out,” a Republican strategist told Politico.

All the presentations at the Republican Jewish Coalition meeting can be seen here. DeSantis speaks beginning at about 1:32.