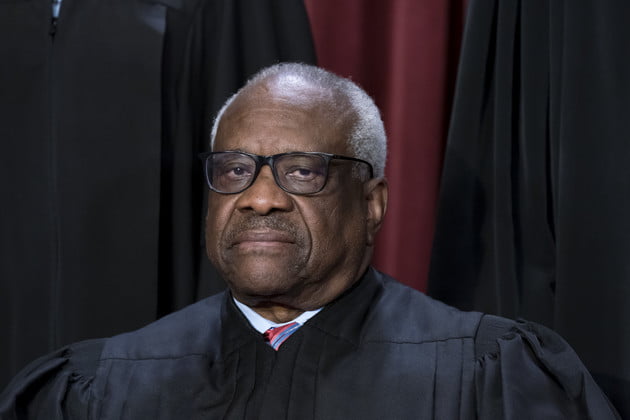 “We want to frame things so that Thomas could be the one to issue some sort of stay or other circuit justice opinion saying Georgia is in legitimate doubt,” Trump attorney Kenneth Chesebro wrote in an email exchange.

“We want to frame things so that Thomas could be the one to issue some sort of stay or other circuit justice opinion saying Georgia is in legitimate doubt,” Trump attorney Kenneth Chesebro wrote in a Dec. 31, 2020, email to Trump’s legal team. Chesebro contended that Thomas would be “our only chance to get a favorable judicial opinion by Jan. 6, which might hold up the Georgia count in Congress.”

“I think I agree with this,” attorney John Eastman replied later that morning, suggesting that a favorable move by Thomas or other justices would “kick the Georgia legislature into gear” to help overturn the election results.

The messages were part of a batch of eight emails — obtained by POLITICO — that Eastman had sought to withhold from the Jan. 6 select committee but that a judge ordered turned over anyway, describing them as evidence of likely crimes committed by Eastman and Trump. They were transmitted to the select committee by Eastman’s attorneys last week, but they have not been publicly released.

The emails, as produced to the committee, included formatting errors that removed “i”s and “l”s. POLITICO has included the missing letters for clarity.

Thomas is the justice assigned to handle emergency matters arising out of Georgia and would have been the one to receive any urgent appeal of Trump’s lawsuit to the Supreme Court — a fact that seemed to be part of the Trump legal team’s calculus.

In another Dec. 31 email, Chesebro explicitly laid out this strategy:

“[I]f we can just get this case pending before the Supreme Court by Jan. 5, ideally with something positive written by a judge or justice, hopefully Thomas, I think it’s our best shot at holding up the count of a state in Congress,” Chesebro said.

Chesebro’s emails continued to lay out detailed strategy proposals about ways to delegitimize Biden’s victory on Jan. 6 and beyond.

In one scenario, Chesebro proposed encouraging Senate Republicans to filibuster long enough to derail the joint session of Congress on Jan. 6, ignoring limitations on the length of debate to push it past that calendar day. He also described how Trump allies could use inaction by the courts to build political pressure against Biden’s inauguration, even after Congress met to certify the results.

“Hard to have enormous optimism about what will happen on Jan. 6, but a lot can happen in the 13 days left until then, and I think having as many states still under review (both judicially and in state legislatures) as possible is ideal,” Chesebro wrote Trump campaign attorney Justin Clark on Dec. 24, 2020. It’s unclear how or whether Clark responded to Chesebro’s message.

The New York-based lawyer has been scrutinized by the Jan. 6 select committee, as well as prosecutors in Fulton County, Ga., who are investigating Trump’s efforts to subvert the election there. In an email on

The Trump’s team’s effort found virtually no traction at the high court. The only outward signs of dissension among the justices were mild, like a Dec. 11 order where the court rejected a bid by Texas to challenge the vote counts in four other states. Thomas and Justice Samuel Alito issued a brief statement saying they’d have accepted jurisdiction over the case, but joined the other justices in denying Texas any relief.

Eastman, an architect of Trump’s last-ditch bid to subvert the 2020 election, once clerked for Thomas and had corresponded with his wife, Virginia, in the weeks before Jan. 6.

Eastman played a central role in pressuring Pence to single-handedly subvert the 2020 election when he presided over the Jan. 6 session of Congress — a legally required proceeding to count electoral votes and certify the election results. In his conversations with Pence’s staff on Jan. 4 and 5, Eastman suggested that he believed Thomas would likely support their efforts.

Ginni Thomas became the focus of congressional investigators after text message emerged showing her urging Trump’s chief of staff, Mark Meadows, to continue efforts to keep Trump in power despite losing the 2020 election. She interviewed with the Jan. 6 panel earlier in the fall.

The emails also shed new light on an effort to get Trump to sign documents connected to a Dec. 31, 2020, federal lawsuit challenging the election results in Georgia, including acute concerns Trump’s lawyers voiced during that chaotic period that Trump might put himself in legal jeopardy if he attested to the voter fraud data contained in it.

“I have no doubt that an aggressive DA or US Atty someplace will go after both the President and his lawyers once all the dust settles on this,” Eastman wrote in an email to two other private attorneys working on Trump election challenges, Alex Kaufman and Kurt Hilbert.

After some exchanges, including with Trump White House lawyer Eric Herschmann, the lawyers agreed they would remove some of the specific figures before Trump swore to the accuracy of the lawsuit.

But they also debated whether the federal complaint should “incorporate by reference” the voter fraud data included in an earlier state-level lawsuit. Eastman warned that since the state lawsuit was filed, evidence had disproved some of the voter fraud data contained in it — and having Trump point to the earlier data would be erroneous.

“I know it is late in the day, but do we need to incorporate that complaint by reference?” Eastman wondered.

It’s unclear how the other attorney responded to Eastman. But in a separate email chain with additional lawyers, an intensive effort was underway to get the court filings in front of Trump so they could be signed and notarized in time to file the lawsuit that evening.

Trump, they were informed, was on a plane back to D.C. and they needed him to sign and notarize the document. Trump attorney Cleta Mitchell said Trump’s personal assistant had informed her they had no access to a notary until Monday.

“So, now what?” she wondered. “Can we figure out a way to file this without a verification?

“There’s no one they can call to come to the White House that’s a notary?” Chris Gardner, a Virginia attorney and former GOP House aide assisting the president’s legal team, asked in an email sent just before 4 P.M. on New Year’s Eve. “I don’t know how we file without it. Presidential trip to a UPS store?”

Mitchell later said she was exploring the possibility of getting a notary to certify Trump’s signature via a Zoom call.

Trump’s signature was key to U.S. District Court Judge David Carter’s Oct. 19 ruling that the emails must be disclosed to the House Jan. 6 committee. Carter said Trump signed the verification to a federal court complaint under penalty of perjury despite evidence that he’d been told many of the fraud claims in the lawsuit were inaccurate.

The messages “show that President Trump knew that the specific numbers of voter fraud were wrong but continued to tout those numbers, both in court and to the public,” wrote Carter, an appointee of President Bill Clinton.